Criticising advertising and its impact on contemporary culture can be difficult. One of the major problems is that it is very hard to criticise single adverts. Taken on their own, individual ads often don’t seem “that bad”, and there are always arguments that are made in defence of them. Yet it isn’t necessarily the individual advert that causes the problem; it’s the drip, drip, drip, effect of seeing similar stereotypes repeated every single day in different ads, throughout our lives, which is of concern to feminists.

So, alongside looking at individual adverts, a potentially more interesting approach is to look at the images we see as a whole and look for common themes or trends which re-appear day after day.

As an experiment, the other day I travelled around London taking snaps of the images I came across in the street and on public transport that showed men or women. I wasn’t motivated by a particular ad that enraged me, and none of the ads were particularly shocking. I simply wanted to find out if there were any stereotypes in the images I saw; any trends, anything I hadn’t noticed about the way they showed women and men. I wanted to see what kind of portrayals of women and men would be seen during an ordinary day’s travelling around London.

I wasn’t interested in explanations or justifications for individual adverts, but rather I wanted to think about the way men and woman were portrayed generally. At the end of the day, what would I learn about men and women from the images I was subjected to?

When you look at the ads that follow, try to imagine a world where the genders are completely reversed. Try to imagine men in the same poses as the women are, and vice versa. Try to imagine how bizarre that world would be. Or, try to imagine what impression of women and men an alien would take away from viewing our world though advertising. It’s an extremely interesting exercise.

One of the first things I noticed was that there were many images showing men and boys in very active poses; running, jumping, leaping, dancing, and fighting. Here are a few of those that I saw. 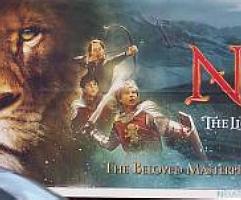 I spotted only one woman in a similar active pose, in a poster for the show STOMP. Of the three figures shown, one of them is a woman, in the bottom left hand corner. 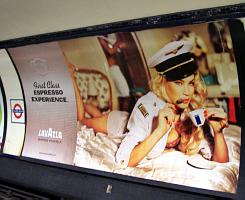 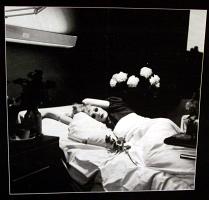 Another similar image which I saw but did not get a pic of was an ad for the Sugababes album, which shows the three singers sitting on the floor.

There are many examples of men being silly and funny, but I saw very few, if any, images showing women behaving in similar ways. Note that many of the men shown being “silly” are not your conventional boy-band types, but rather the “ordinary looking” bloke just having a laugh. I did not see any similar ads featuring ordinary looking women just being silly and having a laugh. All the women in the ads I saw were conventionally attractive.

This limitation on the portrayal of women obviously means that an important part of womens’ experiences (a sense of humour!) is made invisible. Yet it also has a negative impact on men. If only men are shown being stupid or silly, this perpetuates the idea that men are somehow natually more stupid than women and that women are always dignified and sensible.

Here are some of the ones I spotted. Imagine if all the men in these images were women. 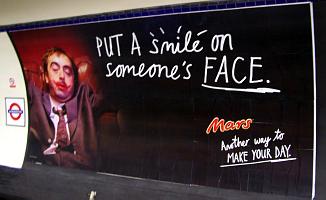 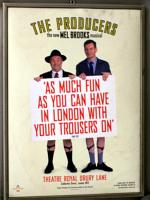 From my limited perspective as a white woman, I wouldn’t have been aware of all the ways women and men of colour are stereotyped and made invisible by the ads that I saw. However, I did notice a couple of things.

Non-white women are shown very rarely, but I saw four advertisements featuring women of east asian appearance. All of these ads portrayed these women either as a geisha or in a higly sexualised manner. One was an ad for a photographic exhibition at the Barbican, showing a heavily made-up woman dressed in a red geisha-style outfit, sat on the floor. The other three are here: 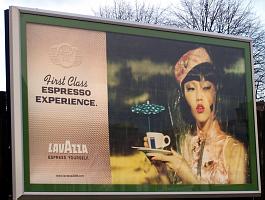 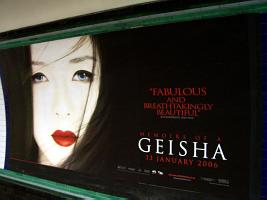 Let me emphasise that these are only the images I saw on just one day. It is shocking how heavily ingrained in our culture the concept of east asian women as sex objects must be.

I would imagine that it must be very difficult for girls from an east asian background growing up the UK if these representations are common.

The only other image I saw of an east asian woman was in an advert for the show Madame Butterfly. Ironically in this one, she was not wearing any obvious make up, she appeared older than most women used in other adverts, and was not portrayed in an overly sexual way. Perhaps the advert chose to portray the woman in this more naturalistic way as a deliberate contrast to the usual “Madame Butterfly” image.

I noticed that male artists were usually represented either by a head and shoulders picture, or by a graphical or cartoonish representation of themselves. Ads for the Gorillas, Jamiroquai, and Kanye West were all represented in a cartoonish way.

Here are three of the head shots for male artists which I saw. None are overtly sexualised. The singer from Anthony and the Johnsons looks at the viewer straight on, unsmilingly (the only unusual aspect of it is that he appears on closer inspection to be wearing lip gloss!). The dramatic image of Maxi Jazz from Faithless seems to show his upper body in a simple, matter of fact way, and he appears deep in thought. The image of Bob Marley shows his head only, laughing what appears to be a genuine spontaneous, relaxed laugh. 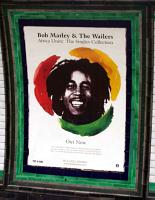 Compare these images to those for female artists. Here is an ad for Goldfrapp, a well-respected British band (in other words, she’s not fly-by-night pop singer). Here, the singer displays her body, dressed as a peakcock. She covers her naked breast and looks over her shoulder in a classic “coy” pose very rarely used by men.

It made me wonder whether in fact most images of female singers show their their full body rather than just their head and shoulders. I didn’t see enough that day to conclude anything, but it would be an interesting comparison.

In fact in the next ad, only Mariah Carey’s head and shoulders are visible. But unlike the head shot of Maxi Jazz, this one highlights her fragility by the inclusion of the butterfly, her posed hand gesture with bent wrists, and the position of her head, which is angled backwards. Her lips are parted slightly, another common feature in images of women which men are rarely shown doing.

Only women go on holiday

I knew this already, but my experiment confirmed it: the vast majority of holiday adverts feature women in bikinis. It would appear that men do not actually go on holiday. And women only ever go on holiday to the beach. And the only women who go on holiday are fashion models. 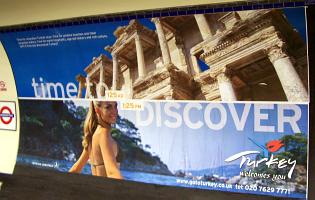 It would seem that when women reach a certain age, they disappear, because they certainly aren’t visible at all in advertising. The vast, vast majority of women I saw in adverts seemed to be in their twenties. In contrast, I did see two or three older men, or men with visible wrinkles.

I saw one ad for a clothing company (I think) which showed a very weather-worn, wrinkled man wearing a hood. I saw another ad for Grand Theft Auto which showed several male characters with scars, wrinkles and frowns, but the only female character shown appeared to be young and wrinkle free.

Two more ads are shown here. In the first ad, a grey haired male expert scrutinises his drink for quality. Here, age is associated with expertise and wisdom. The second ad is for a play called “Heroes” and the image shows three old men laughing together on a bench. Their age is emphasised by the black and white photo. The only other older “woman” I saw was a Sir Ian McKellen as a panto dame. His wrinkles were clearly visible in the poster! It seems that only pantomime dames are allowed to have wrinkles. 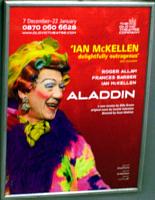 This ad shows two clothed men wearing shades next to a naked woman. It is very rare, if ever, that you would see a similar ad with the genders reversed.

I saw five ads relating to business, work, or finance. Four of these showed

men, only one showed a woman. Three of the ones showing men are reproduced here:

So what did we learn from this? Men and boys run and jump. Ordinary looking men can be silly and stupid. Men never go to bed or lie or sit on the floor. Older women do not exist. If you go on holiday you’ll see fashion models in bikinis. East Asian women are geishas.

It’s only one day’s worth of imagery, but I would guess that the same representations come up often and that the trends I spotted were not one offs.

Should we even care about advertising? I would argue we should. Sure, people are not necessarily passive consumers of these images, but how often do we really think about and question how men and women are being represented? If the same representations of men and women are made over and over again, I would argue that this surely has some impact on all of us, especially children who grow up learning how to be male or female according to what they see.

Adverts are an important aspect of learning what it is to be male or female, because advertising is totally pervasive. There is no way that I can “ignore” or choose “not to look” at the ads when I am walking down a street past several giant billboards or standing on a station platform.

Why not do this yourself and see whether you spot similar trends and stereotypes?

Useful questions to ask are:

Obviously these are just a few ideas. We would be interested to hear how you get on!

A useful resource for those interested in gender and advertising is Genderads, a fascinating website which has collated hundreds of examples of ads. The author of the website has a special feature on advertising in the UK.

Catherine Redfern hopes one day for a commute free of billboards and ad hoardings.