Mexico is running an advertising campaign using sex dolls to educate its “infamously macho men” about why sexual harassment is wrong, the Independent reports.

The open-mouthed plastic figures are the disturbing stars of an advertising campaign hitting television screens, radios and public billboards, showing the inflatable dolls being leered at or groped in the workplace.

The campaign slogan reads: “No woman should be treated like an object. Sexual harassment is not just demeaning, it’s a crime.”

When I visited Mexico a few years ago, there was a perceptable frisson of sexism. Going into one bar/restaurant with my partner and a friend’s brother, I was actually wolf whistled. Yep, in a restaurant!

No wonder president Vincente Fox didn’t realise that comparing women to washing machines with legs was going to get him in trouble.

Legislators and women’s groups were infuriated when Mr Fox joked: “Seventy-five per cent of the homes in Mexico have a washing machine, and not the kind with two hands or two legs.”

Meanwhile, in London, Sony has been digging its nose in the dirt with a series of overtly sexist adverts for its PSP. It’s good to know they care about their female gamers so much they don’t mind running ads with lines like: 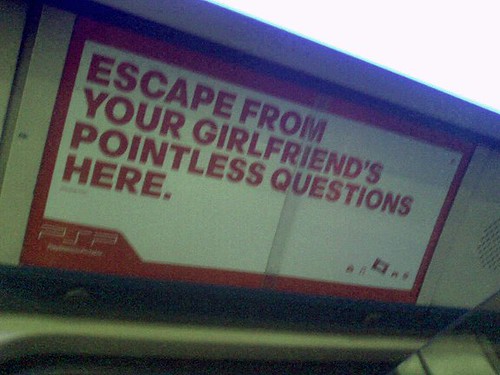