Playboy has published a list of the supposed 25 “sexiest novels ever written”. Supposed, because the list is mostly a bit crap (note the presence of Forever by Judy Blume, which, whilst it was passed around all the girls in my last year of primary school and read aloud and enthusiastically on school trips, I’m sure would not pass the test of time). And also a bit disturbing.

Pandagon doesn’t want to take Playboy up on it, but including Lolita on a list of the hottest novels is… well… maybe Amanda is right, it shouldn’t even need spelling out. And it adds an extra edge of yuckiness to that story from a while back about W.H.Smiths marketing Playboy stationary to school kids.

Some of the other books on the list were more understandable: Tropic of Cancer, by Henry Miller, for example, although it’s dissapointing that they didn’t include anything by Anais Nin. And still more of them, I haven’t read so can’t comment on.

An interesting throw back to the 1970s: 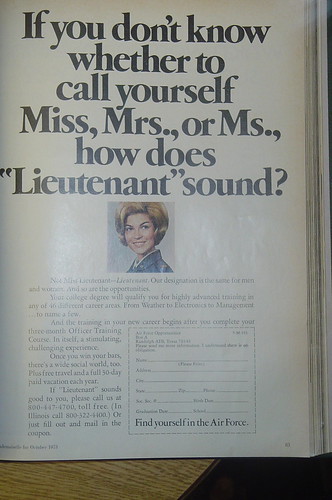 Courtesy of culturecat, who has a small selection of similar pictures up on Flickr.

It’s always an interesting dynamic: the empowerment of taking on such a physically demanding, potentially exciting and adventurous job, versus the awfulness of being in the armed forces, being expected to kill people, take orders and further the dubious aims of the government. Still, you can’t fault their spin.

And the Guardian finally catches up to the knitting/craft craze. Still, an interesting spur to get your DIY on.