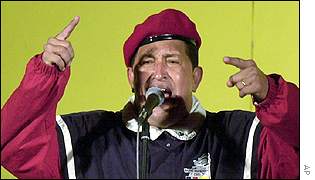 Hugo Chavez has charmed the left wing with bold social reforms in Venezuela and an exciting disregard for the feelings of the US president. But over at Women’s eNews, Jennifer Fasuloargues he has gone too far in his support for Iranian president Mahmoud Ahmadinejad.

In this equation, the only thing that matters is opposition to U.S. military power. Women’s rights, worker’s rights, student’s rights–the things that are supposed to matter to socialists, progressives and people of conscience–be damned.

Chavez appears not to have noticed that the current government of Iran has turned Iran into a country where gender apartheid and hatred of women are enshrined in law.

Although Chavez may be implementing radical and welcome reforms at home, it does seem as though his foreign policy places undue emphasis on opposition to George Bush to the detriment of everything else.

One group that has already issued such a condemnation is the Worker Communist Party of Iran. In a Sept. 14 statement they write, “We see the attempts by right-wing pro-America forces to overthrow Chavez and we value every bit of positive reform by the Chavez government in the interest of deprived and hungry people, but defending the murderous and terrorist leaders of the Islamic Republic, rolling out the carpet for them under the guise of anti-imperialism is nothing but throwing dust in the eyes of the people and covering up the brutal reality of the Islamic regime.”

Meanwhile, the government of Ghana is under increasing pressure to ratify an African Union protocol on women’s rights.

In the blogosphere, Feministing catches ABC in an orgasm faux-pas. It quickly changed a headline from the unbelievable ‘Do women really need to orgasm?’ to ‘When it comes to orgasm, women work harder’.