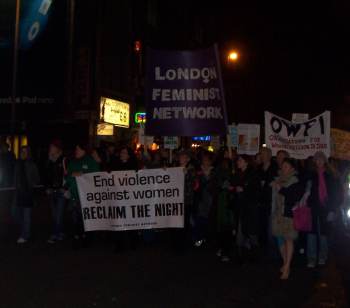 This year’s Reclaim the Night march was a huge success, attracting an estimated 1000 women to central London to protest against sexual violence. It’s a massive achievement in itself that the march has grown so fast since the first of recent times in 2004, and to see feminists gathering in Trafalgar Square (!!!) unashamedly under the banner of feminism was amazing. 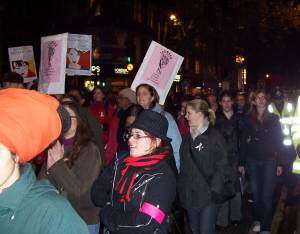 Feminist bloggers are starting to post pics and reports and I’ll update this entry with links at the bottom, when I come across them. 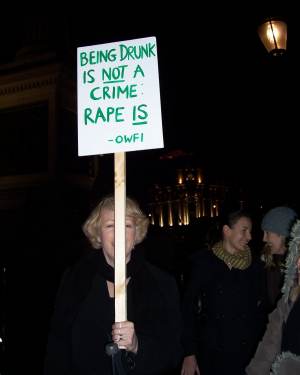 There was a huge variety of women there, from all ages and backgrounds. Amongst others I spoke to lovely women from FORWARD, East Midland Feminists, Object, and BECTU. There were tons of women and organisations represented, many of those are linked on the London Feminist Network website. 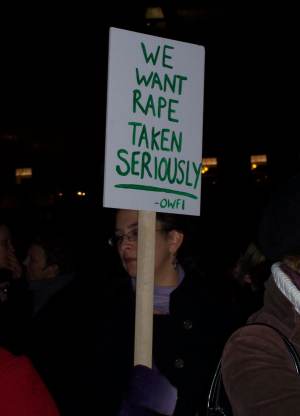 The atmosphere was brilliant, strangers chatting to each other with ease, and having a really good time, waving to the bemused people on the street, in buildings and on buses, shouting:

WHAT DO WE WANT?

WHEN DO WE WANT IT? 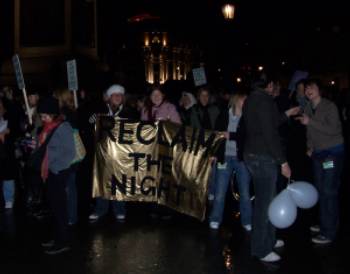 The march snaked around through Trafalgar Square up towards Tottenham Court Road. Half way up Charing Cross Road a large crowd of boozed-up men gathered outside a pub and started chanting loudly and agressively at the women passing, by all accounts they were abusive towards some women. The marchers weren’t intimidated though, and the police soon had a word (Witchy Woo has a couple of excellent shots of this fracas). But overall the reaction of passersby was positive, some applauding the marchers.

Reports, experiences and photos from the march (to be updated when more are posted):

Fate is Chance reports on the march.

Sparkle*matrix on the march, activism and deflating an inappropriate penis.

Charliegrrl on the night of activism.

Charliegrrl has some more photos here

Not a Feminist But reports.