Do you have a rape alarm?

If you do, get yourself down to the Sudanese embassy for 10AM today to take part in a protest against the rape of thousands of women and girls in Darfur.

The action is part of a global protest against the use of sexual violence in the conflict. Amnesty and Human Rights Watch are also due to publish a report revealing that the number of rapes reported around one camp in Darfur has risen to 200 a month.

Halima Basheer (not her real name) survived being gang-raped and tortured in Darfur. She will be speaking out for the first time and attending the

demonstration in London. She said:

“Janjaweed militia and Government soldiers attacked a primary school for girls, raping the pupils. They were aged between 8 and 13. They were in shock, bleeding, screaming and crying. It was horrific. Because I told people what happened, the authorities arrested me. They said, ‘we will show you what rape is.’ They beat me severely. At night, three men raped me. The following day the same thing, different men. Torture and rape, every day, torture and rape.”

“If armies were storming villages and towns in the UK, brutally raping women and girls or executing the men without retribution, there would be absolute uproar from the international community. Why then, when we know that this is happening in Darfur, are we not seeking to stop this?

“After Rwanda, the international community said ‘never again – that statement is hollow and meaningless when we see the tragedy unfolding in Darfur. Enough is enough, let’s get on with stopping this absolute catastrophe.”

Meanwhile, the Fawcett Society is looking to increase its ranks by encouraging celebrities to don its “this is what a feminist looks like” t-shirts.

Grey-Thompson is modelling one of the t-shirts below. 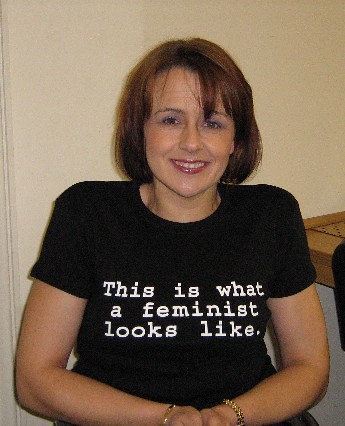 You get one free when you join Fawcett, as though you needed encouragement.

Dr Katherine Rake, director of Fawcett, said: “Today we launch our campaign which we believe will demonstrate widespread support for feminism. For us at Fawcett, feminists are people who believe in the principle of equality between women and men. But feminism is often misunderstood. Our challenge will underline the importance of feminism and will reclaim the f-word for a new generation.”