From EU blunders to furry elephants

Based in the Lithuanian capital, Vilnius, it will collate data on gender issues from all the 25 member states, hold conferences, etc. The sort of thing that EU bodies do.

All well and good, you might think. Except that the social policy commissioner, Vladimir Spidla, had this to say on the subject of the gender pay gap:

The pay gap between men and women in the EU is currently around 16 percent, of which – according to Mr Spidla – about half corresponds to objective reasons and the other half to “pure discrimination.”

Because the other 8% is down to women deserving to be paid less than men, of course!

Remember Holla Back NYC, the website where New Yorkers upload photos of the men who groped them, taken on their mobile phones? Well, blogger Jackie Danicki did exactly the same thing, and found out from the police that the two guys who she alleges assaulted her have also “beat up a gay guy and knocked his tooth out”.

Meanwhile, the US state of New Hampshire is to offer the cervical cancer vaccine to all girls.

“Some say giving the vaccination to 11-year-old girls is a license to promiscuity. I disagree,” New Hampshire Health and Human Services Commissioner John Stephen said. He urged abstinence, noting that the vaccine will not protect girls from other sexually transmitted diseases, including HIV, or from getting pregnant.

Maybe this is the first step towards the total eradication of this disease – some good news for once.

Talking of good news, a new feminist magazine and blog has been launched. It’s definitely one for the blog roll, as they are already chalking up some fantastic posts.

For example this one on controversial research claiming to show that women were to blame for the Neanderthals dying out because they hunted instead of gathering things up and making the tea like good girls. 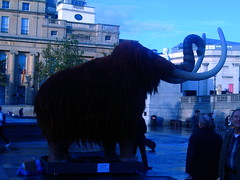 Apparently, because women were built hearty, they went out on dangerous big-game hunts with the men. They probably blocked escape routes and flushed out the game. The evidence? No needles, grinding stones, or bones of small animals in the campsites, which apparently are forever signs of women’s work, whatever the lack of actual evidence for that to be true.

You can also check out an interview with Girlistic founder Jaymi Heimbuch over at Feministing.