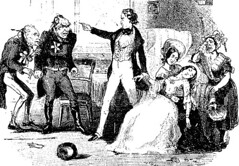 Anyone hoping that David Cameron’s leadership of the Conservative party marks a shift to the centre-ground, if not quite the left, will be sorely disappointed by the latest revelations about its “family” policies.

Instead of advocating family-friendly policies such as universal child-care, a new report makes clear that that the Tories favour tax-breaks for married couples and a return to the “morality” of the Victorian era.

Ex-Tory leader Iain Duncan Smith is behind the report, which will feed into the party’s policies when it comes to the next election.

To give you a flavour of his retrograde point of view, here is one quote about the joys of the Victorian household:

You can argue that our Victorian forebears succeeded in achieving something very unusual between the 1850s and 1900 in changing public attitudes by – dare one use the word – instilling moral codes. I don’t want to suggest this was an ideal society, but it was one where a sense of moral values and of the responsibility people owed to each other did seem to be pervasive. There was a much greater sense of shame in respect of transgressions.’

Unfortunately, Duncan Smith does not elaborate on this idea, so we have no idea which of these values we are meant to emulate. But it is hard to understand how it is possible to talk about Victorian family values without understanding that those values confined women in the home, split women into those that were respectable and those that were beyond the pail, in accordance to their sexual behaviour, willingness to cloister themselves up and degree of economic freedom, and kept women disenfranchised both politically and economically.

What “transgressions” should become “shameful”, I wonder? To laud a society that didn’t recognize rape within marriage is a strange position indeed.

Duncan Smith’s report will say family breakdown costs £20bn a year, adding: ‘At the heart of stable families and communities lies marriage. For too long this issue has been disparaged and ignored.’ Underlining his traditional views, he told the Sunday Telegraph that gay couples were ‘irrelevant’ to family policy because only 0.5 per cent of Britons were gay. The true figure is six per cent.

I suppose that it speaks for itself that the man in charge of forming the Tories’ social/family policy doesn’t even know what proportion of Britons are gay.