A headline writer with an empty brain?

When I read a headline like The Girl with a Boy’s Brain, I prepare myself to be annoyed.

This is the headline Psychlogy Today decided to give to a profile of a 24 year old woman with Asperger’s Syndrome. 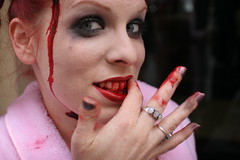 Brains, they’re all the same to zombies

It’s a bit of a shame, because the subject matter is extremely interesting. In fact, there’s only one reference to the so-called “maleness” of Kiriana Cowansage.

Kiriana fits the AS profile quite neatly. What makes her exceptional is her gender. While the overall prevalence of Asperger’s is 20 to 25 per 10,000 children, it’s much more common in boys than girls. We don’t understand what causes autism and Asperger’s, or why more boys have these syndromes than girls, but some scientists conceive of them as expressions of extreme “maleness”—a talent for systemizing as opposed to empathizing.

Well, the scientists say it so it must be right. Except:

Other experts attribute some of the gender gap to the widespread misdiagnosis of girls. “Girls are pretty neglected,” says Shana Nichols, who specializes in treating girls with AS. Most of what we know about the condition is based on research on boys; theories about how it manifests itself differently in girls stem mainly from anecdotal evidence. Researchers agree that girls with AS tend to be more anxious and less aggressive than the boys. And during their teenage years, they are at an increased risk for awkward sexual situations and even date rape because of their inability to interpret social cues and their tendency to take statements literally.

In fact, Cowansage’s story is a classic example of misdiagnosis. She only realised she had AS when she was already at university, and consulted doctors in order to figure out why she was having so much trouble understanding lectures.

It’s lazy journalism to label Cowansage a girl with a boy’s brain (not a woman with a man’s brain, either). The reporter briefly describes what I suspect is a matter of some contention within the scientific community, giving equal weight to both then leaving it alone. But the headline adopts one of these theories – and guess what, it happens to be the one which reinforces gender roles.

Photo by loerror, shared under a Creative Commons license