The BBC is planning a documentary about the ‘c-word’, provoking cries of outrage from the Mail on Sunday. 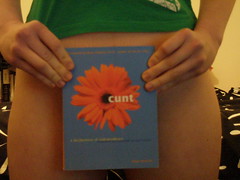 Capitalising on the nation’s reaction to the totally unacceptable and racist behaviour on Big Brother, the Mail took a similar line with this programme, screaming “Now BBC plans an ‘I love the C-word documentary'”.

While there’s plenty that could go wrong with a programme about this word, the BBC appears to have taken the right tack.

Its presenter – who is expected to be a comedian, rather than an academic – will interview pundits, academics and artists about the use of the word over the past 30 years and the word itself will be broadcast uncensored.

Contributors will include feminist academic Germaine Greer and Eve Ensler, the author of The Vagina Monologues, an acclaimed stage play which features women talking about their genitals.

By which we can extrapolate that the BBC3 show will dig a bit deeper than the Mail, or indeed Tory shadow culture secretary Hugo Swire, who gave this reaction:

“The change of language is an entirely good thing to look at, but I don’t see why they have to sensationalise the subject.

“I’m sure they can have a stimulating debate about the change of language without resorting to the crude and baser words.”

And that meaning, of course, it why a documentary about the c-word – if it’s handled appropriately – could be revealing of attitudes towards women and useful to society.

Photo by JCardinal18, shared under a Creative Commons license