Perks to being in female minority, says gamer

Sometimes, being the lone woman – or one of a small minority – in a male dominated field like game development has benefits, says Michelle Clay over at WomanGamers.com.

It’s like a sneaky little superpower, and I got it just by showing up and doing my job.

She also has some good tips for dealing with some of the problems she has encountered:

A most typical situation is this: a man will sometimes apologize for “naughty” language when a woman joins the conversation. I am not some fragile thing to be offended by off-color topics, and I find that such a polite reaction inadvertently erects a social barrier between myself and the men, and I don’t want that barrier in my workplace. So, if a man excuses himself for his “improper” language, I retort with a colorful metaphor and a grin. Tiny problem solved.

While I’m not sure that I agree with Clay’s analysis – I suspect that negatives probably outweigh these perks – there can be some benefits. It puts me in mind of a recent episode of the Addicted to Race podcast, which includes an interview with Kenneth Arroyo Roldan, author of Minority Rules: Turn Your Ethnicity Into a Competitive Edge. Roldan also has lots of tips for getting ahead and exploiting your ‘difference’ – which he notes also apply to women working in male-dominated workplaces.

All of which is useful to know, but questionable. As jane over at girl+game=advance points out:

Wanting to be the only women in a group of male colleagues is a double-edged sword. If that’s what you base your work happiness on, what will happen when another woman joins the team? Jealousy, and insecurity, because suddenly that which you valued is gone. I don’t suggest that Michelle is advocating this; I think she’s genuinely simply trying to persuade more women not to be frightened off by the male-ness of the industry. Still, I think there are some women who are drawn to the industry precisely because of its maleness.

Then there is the backlash – the feeling among some of your unkind male colleagues that you only exist there because you are a woman; and thus you are reduced to your femininity. Moreover, you become the focal point for any discussion of “what women want” – suddenly you are an expert, because you are female, and often you get put into the position of speaking for all womankind.

On the last point, it’s also worth noting that businesses provide services. In this case, games. And a business which is relying on one or two specific women in the office to provide the “female” perspective, purely on the basis of their gender, is probably going to produce male-oriented games. Especially if those women have already adapted their behaviour and attitudes to fit into a male-dominated workplace. 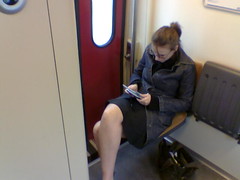 One commenter at the excellently-named blog also added this:

It wasn’t until I went to USC for my masters in Interactive Media that I suddenly felt uber-aware of my female status in a male-dominated room. You touch upon one reason for this – suddenly you are like the gay roommate in the Real World house: it’s your responsibility to represent your entire race. And that’s not fair. Making games for women is really a discussion about making different kinds of games that appeal to different people, and somehow women just slammed with representing that whole concept.

I now work at a game development studio, and am the only woman – there are 10 guys that work here. There was an adjustment period for them, while they tried to figure out what i was about, and if i was going to freak out on them. The first day that i came to work, everyone was so cautious and worried that i would be offended (they would start to swear and cut themselves off, while shooting me worried glances). Now however it’s much better – i get shot with the nerf darts just like everyone else, and am more than happy to fire back.

Doesn’t this say everything? These men didn’t even know how to act around a female colleague. In the 21st century. Individual women might benefit from minority in the short term, but in the long term, equality is better for us.

Photo by Kaeru, shared under a Creative Commons license