It is not often that sports truly appeal to me, but I can safely say that pillow fighting does.

Steven Wells over at the Guardian sports blog says:

In December 2004 the competitive pillowfighting concept was tested at a Toronto rock gig using burlesque performers. Watching women “lost their minds”. When given pillows “they tore each other apart”. The formation of the Pillow Fight League (slogan “Fight Like a Girl”) followed shortly.

Soon professional pillowists with picaresque punk-rock monikers like Sally Spitfire, Champain, Eiffel Power, Polly Esther (“She’s a pissed-off waitress in real life, and a pissed-off waitress on the mat”), Sarah Bellum, Lynn Somnia, Betty Clock’er, Digit Jones and Ruth Lesley (“ritualised combat helps to keep me in top form for when the revolution comes”) were slugging it out in front of crowds of over 500 in properly regulated matches across the continent. 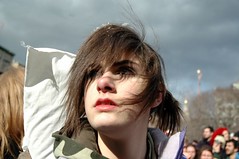 The Pillow Fight League. When will it come to London?

Photo by LarimdaME, shared under a Creative Commons license