Women and Work Commission will not back pay audits

A group set up by the government to investigate how to close the pay gap between women and men will not recommend mandatory pay audits, according to the Green Party.

Jenny Jones, Green Party London Assembly Member, comments: “The increasing incidence of women taking cases of gender discrimination to employment tribunals indicates that women are no longer prepared to suffer in silence. At the top of their professions, women have spoken out on sexual harassment and prejudice at work as well as financial inequality.

“The Women and Equality Unit of the Department of Trade and Industry claims that the government has presented ways to make it ‘easier’ for employers to pay fairly, such as through voluntary pay reviews, but this has failed to present a clear message that pay discrimination along gender lines is unacceptable. The Equal Opportunities Commission revealed last month that just one third of companies have held an equal pay review.

“It was hoped that this report would present the case for mandatory equal pay reviews in both the public and private sectors. It now looks like the government is not up to the job of combating gender discrimination and it will be left to individuals to struggle against unfair practices in the workplace.”

But I suspect that the women who do take their employers to court are a tiny minority of those who believe they are being paid less than male colleagues.

After all, taking this step is quite extreme, and could be damaging to your career. So things must be pretty bad, or you must have some kind of conclusive evidence, before you go to a pay tribunal. 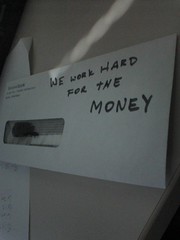 The beauty of mandatory pay audits is that they don’t rely on women reporting the problem. And, let’s face it, in many workplaces the issue of pay is a sensitive one. Asking your colleagues straight out what they are getting can be difficult. So much of the problem remains concealed.

What is especially worrying is that the Women and Work Commission is not prepared to back the idea, or, it seems, even to put it forward as an option. How disappointing.

Photo by AZAdams, shared under a Creative Commons license