The 32nd Carnival of Feminists 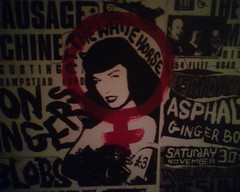 If you are cyber-savvy you will not have failed to notice the cultivation of a community of bloggers during recent years.

The possibilities offered by self-publishing sites means that everyone from your elderly next door neighbour to top celebrities and political aficionados can have their say, with the open accessibility of the Internet meaning that bloggers have a ready-made audience waiting with bated breath to see what they’re going to eat for dinner tonight, and read their compulsory psychological introspection discussing why bangers and mash seemed like such a good idea.

Although I’ve not yet felt the need to share the news that I’ve just brushed my hair, bought some new shoes or had a particularly nasty poo with the Internet community, I can’t deny my compulsion to read the blogs of those who do. There’s no doubt about it, the Internet blog is gaining more and more cultural significance, a way for writers to communicate with their audience almost instantaneously, and it’s not surprising that journalists are increasingly using this as a means of immediate expression.

The blog has become a useful way to articulate ideas, with the healthy proliferation in feminist blogs over recent years helping to propagate a feminist community online. The Carnival of Feminists, held on the first and third Wednesday of each month, aims to collate and showcase the best feminist blogs floating around cyber space. Developed by the writer and journalist Natalie Bennett, and hosted by a different blogger for each edition, the carnival aims to unite feminist bloggers from around the world and to showcase the work of new and existing feminists.

The 32nd Carnival can now be viewed on BumbleBee Sweet Potato, which opens with a discussion of the controversy surrounding the hiring of two feminist bloggers, Amanda from Pandagon and Melissa from Shakespeare’s Sister, to work on a political campaign in the US. BumbleBee goes on to highlight debates surrounding the re-naming of Eve Ensler’s play, The Vagina Monologues, in Florida, following a complaint that the name was offensive, followed by a round-up of women’s health and the re-enforcement of gender stereotypes.

BumbleBee Sweet Potato is a US-based blogger, and she provides the following self-description on her blog:

I’m a telecommuting mom in my late thirties. My daughter is the Bumblebee. My son is the Sweet Potato. You’ll have to ask their father.

This Carnival publicises some fascinating writing and is definitely worth a perusal. The next carnival will be on March 7th.

Photo by j-sin, shared under a Creative Commons license