Billie Piper has spent a tumultuous time in the media spotlight. Having first burst onto our screens as a squeaky clean teenager dancing around street corners with a cheesy looking cartoon-like figure, she then spent a few years travelling the world having married one. And now they are just good friends. It happens. 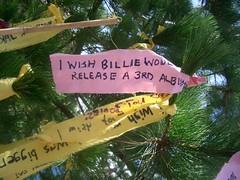 We must credit Billie for her staying power. She’s previously admitted to having a strong penchant for a drink or two, (admirably weathering the barrage of media onslaught predictably precipitated by this declaration), and she’s also overcome an eating disorder to become one of the most promising actresses on British television today.

Having wowed audiences with her role as Alison in the BBC’s adaptation of Chaucer’s The Miller’s Tale during 2003, her acting career has gone from strength to strength, with Piper receiving much critical acclaim as Rose Tyler in Doctor Who.

Piper’s dramatic transformation would not be down to a change of image, but rather for her role as the sexy seductress, Belle du Jour, the London call-girl who shot to fame when she published her intimate diaries on her blog, as reported by the BBC this week. The series, to be produced by Channel Four, is currently in development, and Piper is reported to be attached to the project, although this has yet to be confirmed. Belle herself is not entirely sure who will be playing her namesake in the transmogrification of her diary to the screen, but she recently remarked on her blog that:

Oh, and before you ask – I heard the rumours too, and think she would be absolutely lush.

Belle’s blog, and the two resultant books it has spawned, have become so popular at home and across the pond owing to the honest and explicit way she represents the world of prostitution, and the skill with which she is able to communicate her experiences in a style that is both humorous and easily accessible. She exuberates sexual confidence, having the capacity to divorce her personal life from her profession, and is incredibly assured about her sexuality so much so that she is not only an adventurous, but also an extremely open-minded, lover.

She speaks candidly about sex, breaking down gender stereotypes and the widely conceived perception of women as just being sugar and spice and all things nice. Ok, we can be all those things sometimes, but we can also be proud to have a rich and varied sex life too, and this is what Belle tries to reiterate through her writing.

Hopefully Channel Four will be able to produce an accurate adaptation of her blog, fully encapsulating the ethos of her work, refusing to give in to the temptation to dilute her experiences. In an ideal world they would resist the changes needed in order to avoid being deemed offensive by those who still subscribe to the mainstream idea that there are still carefully defined modes of acceptability with regards to the ways in which men and women can behave. But, of course, this still remains to be seen.

Photo by trixie, shared under a Creative Commons license