Blogging from inside the comics industry 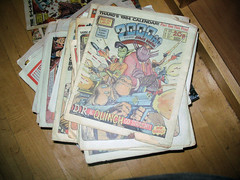 What does a comics editor do? If you’re interested in finding out, you could do much worse than read the new blog of Rachel Edidin, who works for Dark Horse Comics (the ones that do the Buffy comics).

In a male-dominated industry like comics, it’s great to see a woman in an editorial role speaking out. As she explains, editors chose what projects get made, which means they are in a position to influence the portrayal of women and give female comics writers and artists a leg up.

Although she says “please don’t make major career decisions” based on what she says, we could do with more women in the industry. As fellow Girl Wonder blogger Karen Healey testifies on a regular basis.