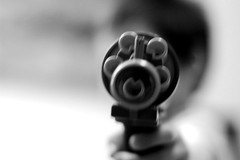 David Cameron wants to “compel” fathers to play a bigger role in their children’s lives, in a big to stop gang violence, the BBC reports.

He was speaking in response to the shocking series of murders in South London.

He told the BBC he backed tax breaks to help families stay together and promoting a “culture of responsibility and respecting authority”.

As ever, it is hard to see how giving someone a tax break will make them stick around, or make them a better father. Indeed, if a father is only sticking around because it makes financial sense, perhaps the family in question is better off without him.

He told BBC Radio 4’s Today programme: “I believe in marriage. I believe in people making a commitment to each other and staying together and trying to bring up their children properly.”

Children were often attracted to gangs if they lacked a father figure, he said.

Just unpack that for a moment. There’s a direct correlation between being brought up in a single family and being sucked into a life of crime? And only fathers are qualified to steer their children away from that fate. Ug.

A Unicef report published this week put UK children at the bottom of a well-being league table of 21 industrialised countries.

Mr Cameron will later tell a youth organisation in Oxfordshire that this means society is in “deep trouble”.

Finally, I agree with Cameron. But his solutions are unpalatable, impractical and laden with views on the gender roles of parents.

Photo by Beard Papa, shared under a Creative Commons license