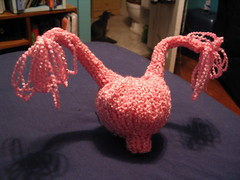 Nothing seemed like a more appealing way to make cash as a student than those advertisements requesting medical volunteers.

For just half an hour of your time you’d be rewarded with £10, a photograph of your brain and a couple of soggy biscuits. The only downside (as, of course, there would have to be) was that you’d have to pump your body full of so many drugs that Pete Doherty would start telling you to go into rehab, and you may have to lose part of your cerebellum. But nobody said that saving the world would be easy.

Now we are being called upon to do our bit for medical science. Last night, the Daily Mail reports, the fertility watchdog approved plans for women to donate their eggs to help with stem cell research into diseases such as Parkinson’s, Alzheimer’s, multiple sclerosis, heart disease and strokes.

Campaigners are celebrating the news, since until now scientists have been forced to use eggs remaining following fertility treatment, which are not only in short supply, but are often of poor quality.

This decision by the Human Fertilisation and Embryology Authority was met with criticism, since extraction procedures are not only intrusive, but have the potential to precipitate health problems in the donor.

Volunteers will have to take a medley of powerful drugs before being eligible to donate, and critics are concerned that the lives of women will be endangered for research which, although promising, has not yet been particularly profitable.

In response Professor Chris Shaw, a neurologist at the Institute of Psychology in London, remarked that:

Most people who contribute to research do so on an altruistic basis and many medical research studies contain an element of risk.

If this research is successful, scientists will be able to use cloning techniques to propagate embryos identical to those suffering from disease, which would provide stem cells that offer the prospect of repairing tissue destroyed by the illness.

In return for our genetic material, we will be given £250 to compensate for loss of earnings, travel expenses and, in some instances, the provision of childcare.

The question of the detrimental consequences to women’s health though is an important one, since we have to ensure that we are seen as playing an active role in this scientific development, and not as unidentified specimens providing the ‘men of science’ with spare parts.

It would be easy to denigrate the role of women in this procedure to that of anonymous donor, but those of us who are willing to participate in this programme are the true pioneers and should be seen as such.

Photo by xamonster, shared under a Creative Commons license