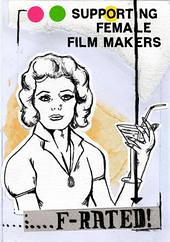 If you’re in London on Saturday 17 February, why not drop in at F-rated, an event to support female filmmakers.

It’s going down at Rush on Frith Street in Soho, and the music promises to be excellent: Le Tigre, The Gossip and Peaches.

The night’s being organised by a director and her producers, and will help fund their film. No word on what the film’s about, but based on their taste in music, it should at least have a good soundtrack.