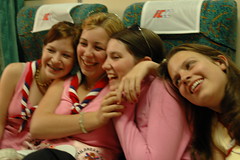 As a young girl I was never a fan of the Girl Guides. I attended one meeting, hoping that with the uniform would come some sense of authority, but as we were all dressed the same it was difficult to discern who was in charge and so the Machiavellian facet of my personality, suffering complete dissatisfaction, decided it would be best not to return.

Besides, the only function I could see they had was to darn old socks and pants, as well as to bake cakes for people, and where’s the good will in that?

But the cynicism displayed by my 10-year-old self and stretching into adulthood was unfounded, demonstrated by the findings of a recent UK-wide survey of Girl Guides.

According to a report by the BBC the results of the investigation carried out by Girlguiding UK, (which questioned 3,200 members ages five to 25-years old), determined that almost two-thirds of girl guides feel women have not yet reached equality with men, with 73% of girls questioned believing that women are unfairly stigmatised for behaviour that men would not be criticised for.

The report also found that Dame Kelly Holmes is the top female role model, with 81% of girls claiming that they won’t be financially dependent on their partners, 30% aspiring to be doctors, 12% displaying political ambitions and a huge 90% claiming that they plan to return to work after having children.

It’s encouraging that these young girls are not only considering careers in professions traditionally dominated by men, but that they are also embracing their role of future mothers, demonstrating a belief that it is possible to have children and lucrative careers.

What was concerning though was that over one third of the girls questioned believed that they are discriminated against on the basis of their gender, and not given the same careers advice at school as their male counterparts. The report went on to show that 39% of the girls were concerned that they will not be paid as much as men in the work place, which demonstrates the extent to which gender bias has become ingrained so much into the national consciousness that it is passing through us to the young.

It’s encouraging though that these girls and young women are aware of the unfair realities of the work place, with many still determined to pursue their chosen careers regardless of their sex (81% of 16 – 25-year-olds and 90% of 10 – 15 year olds are confident they can do what they want).

With young girls and women displaying such a profound level of cultural awareness, we cannot but be hopeful for positive change in the future, and that women will be given the recognition and opportunities that we deserve.

Photo by an agent, shared under a Creative Commons license