Back in December, we blogged about new evidence that appeared to show that Swedish prostitution legislation – which criminalises the men who buy sex not prostitutes – was failing to curb the oldest profession. This is of particular interest because several high-profile British politicians have discussed emulating the Swedish legislation, in an attempt to tackle prostitution in the UK.

Guest blogger Kristina Maki has kindly stepped in to give an overview of what’s going on in the North: 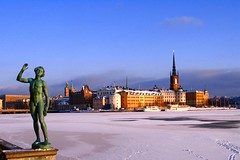 The current law on prostitution in Sweden, adopted in 1999, is unique in that it criminalises the buying but not the selling of sex.

This law and its implications are often debated and compared to the Dutch laws on prostitution where both brothel owners and prostitutes are decriminalised.

In Sweden, prostitution has been viewed as a social problem for some time now. Even before the implementation of the law, the government’s policies tended to advocate measures providing support networks for prostitutes, including provision of permanent funding for municipal projects and services such as sexual health clinics, counselling, and retraining schemes.

Social services in Stockholm reported that street prostitution ‘disappeared almost completely’ (other sources cite a tenfold decrease) in the immediate aftermath of the introduction of the law. There has been much written on the reasons behind this initial decrease in numbers and the consensus appears to be that it’s unlikely to reflect a move away from sex work and more likely to be attributable to many prostitutes having been forced to work ‘underground’ away from the reaches of social services and the police.

It has since become apparent that a lot of the prostitution previously on the streets has been moved into brothels in apartments and that, over the years since 1999, there has been a steady increase in the numbers of prostitutes working on the streets as well.

A recent article in one of the main national newspapers (DN 27.12.2006) points out that it is extremely difficult to prove this crime as those buying sex must literally be caught in the act and, even then, very few cases actually end up in court.

Many of the women interviewed for the article agreed that it was tougher to find customers since the implementation of the law, and that they now had to find places to work away from the police and social services to, for fear of the men being fined or imprisoned.

Although it is certainly a good idea to focus efforts to eradicate prostitution on providing support services for those working as prostitutes—and their clients, though unsurprisingly there was no reported rise in users of this service in Sweden—the Swedish case seems to demonstrate that criminal law, whether it criminalises or decriminalises prostitution, is unable to tackle social problems that are such a clear manifestation of the most basic inequality in all societies.