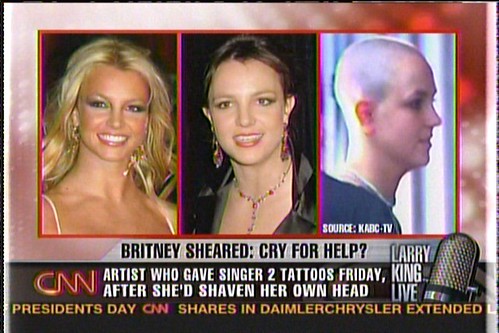 If you don’t live under a rock on Mars you’ll now that last weekend Britney Spears was yet again subject to the scrutiny of the international press. But what has she done this time?

No, she’s not met someone in a club and got married in a shell suit in Vegas whilst eating some curly fries, nor has she been snapped sans-knickers, legs akimbo rolling around LA with Lindsay Lohan and Paris Hilton, nor has she been seen cruising around at top speed with a baby dangling from each of her finely toned arms.

No. This time the press think she has gone to far; she has shaved her head.

Last Friday Spears was spotted by the paparazzi outside a hair salon in California having entered and allegedly demanded to have her head completely shaved despite protests that she would regret it.

It’s been a difficult few months for Spears, who filed for divorce last November on the grounds of “irreconcilable differences”, and this, the latest in a serious of spontaneous acts by the star, has done nothing but perpetuate the press generated perception of her as some sort of media monkey, who can be made to dance, followed and photographed at will in order to increase the circulation of magazines and newspapers.

Many consider this behaviour demonstrative of a breakdown and Spears’ desire to retreat from the media spotlight, with psychologist Linda Papadopolous telling the BBC that with her dramatic new look: “She’s saying: ‘Leave me alone. I won’t be who you want me to be.’”

But why is it that a woman shaving her head is so scandalous? The controversy and attention surrounding Spears has consolidated the archaic idea that hair is a defining part of the female identity, and that to go against the widely conceived norm, and to appropriate a hairstyle traditionally considered to be masculine, is synonymous with the rejection of womanhood and femininity.

A woman shaving her head has negative connotations, and is historically linked to sexual promiscuity and corruption. This is an outdated attitude that dismisses the varying levels of masculinity and femininity present in the individual, and therefore it’s possible that Spears’ new hairstyle is representative of her self-empowerment.

By ridding herself of her trademark blonde flowing locks, and ignoring the cultural significance invested in a woman’s hair, she is demonstrating a determination to do what she wants in spite of the criticism she will receive.

With the hair salon reportedly trying to sell Spears’ hair for $1 million (£512,000), and a bidding war currently in progress for her locks, (as reported today by The Guardian), everyone is trying to cash in on the erratic life of the fallen pop princess, and we can only hope that this was an act symbolic of her independence, and not the cry for help the press seems to be hoping for.