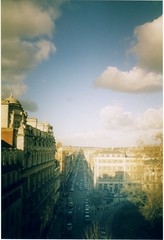 Doctors on Harley Street will not be allowed to perform abortions in the future, the BBC reports.

Howard de Walden Estate, which owns much of the property on the street, has said it will not give out new leases, or renew existing leases, to practices that offer abortion, cosmetic surgery, euthanasia or cloning. Yes, those last too are illegal anyway, so you’d hope they wouldn’t need to add that stipulation.

Simon Baynham, managing director of the Howard de Walden Estate, told the Estates Gazette magazine: “There are still doctors doing certain procedures that we’d rather were not here.

“So we are steering a course that will restrict them. These doctors have old leases and the policy is new. It’ll take time to work such tenants out.”

Although this will obviously only affect a tiny – wealthy, privileged – minority, it offers a worrying precedent. Abortion Rights is worried that it could be the first stage in an erosion of services.

The move over abortion was criticised by pro-choice group Abortion Rights which said members of the estate clearly wanted to impose their beliefs on others.

“The Howard de Walden Estate’s decision to prevent abortions from taking place in Harley Street is reminiscent of the situation in the US where abortion clinics are being driven underground, closed down or attacked.

“There, the anti-choice lobby’s tactics have severely impacted on women’s access to abortion – driving women to desperate measures.

“That is not a situation we should emulate in Britain where the overwhelming majority of the general public support women’s right to make her own abortion decision – one that no woman takes lightly.”

Plus the pro-lifers are crowing over the decision.