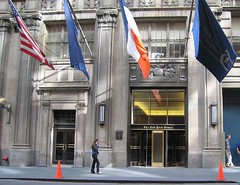 How do you become a book reviewer for the New York Times? Well, it turns out, if you’re a woman you might as well not bother applying, because editor Barry Gewen doesn’t think female reviewers can tackle “general audience” books on things like military history.

As reported on AlterNet, Gewen gave a lecture recently, in which he had a self-described “Larry Summers moment” – recalling, of course, the former president of Harvard, who said that women don’t succeed in science and maths in as many numbers because we’re just not smart enough.

In a similar vein, Gewen reportedly said that he doesn’t like to hire women as book reviewers because “they just can’t write for a general audience about such topics as military history”.

And by “hire”, I mean “give jobs to all his buddies on other male-dominated publications”.

He explained that NYTBR editors find reviewers by talking to colleagues and reading publications such as The New Yorker, The New York Review of Books, and The New Republic, insisting that he and his colleagues are not overtly prejudiced people but admitted they might have subconscious prejudices.

Photo by chadwho1ders, shared under a Creative Commons license