One year to save the Feminist Library 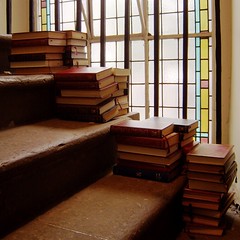 Some readers might know this, but several of the bloggers at the F Word, including myself and Louise, are involved in volunteering at the Feminist Library.

We had an emergency meeting over the weekend, and have come to the conclusion that we will try and keep going for one more year.

We are still looking for volunteers and other offers of help, so interested readers can email us at [email protected] We also have a MySpace page, so add us as a friend!

ONE YEAR TO SAVE THE FEMINIST LIBRARY

At an emergency meeting of the Feminist Library management committee,

volunteers and supporters, it has been decided to give ourselves a

year to try and keep the collection together.

If no suitable home – either autonomous or as part of another

organisation – is found for the library by February 2008, the

collection will be split up and dispersed to suitable libraries and

archives across the country, and the Feminist Library as an

organisation will be dissolved.

Despite the efforts of a number of dedicated volunteers, and a change

in management, the library has not been able to get itself out of the

crisis induced in 2003 by a sudden vast increase in its rent. The

community to stop this valuable collection of many thousands of books,

pamphlets and ephemera, collected since 1975, from being lost.

At the well-attended meeting, held on 24 February, a great deal of

support was voiced for the library, and it was decided to make one

to join the management committee. Taking guidance from the meeting,

that the library should retain its autonomy if possible, the

reinvigorated management committee will give itself a year to explore

feminist library, either independently, or within another

In addition, a number of volunteers put themselves forward at the

meeting to open the library to the public once again, carry out

One member of the management committee, Gail Chester, said: “It was

library and want us to keep going.”

Jess McCabe, who also sits on the management committee, added: “The

feminist community has demonstrated it wants us to keep on plugging

away at keeping the library open, and that’s what we intend to do.”

Photo (not of the Feminist Library!), by 0olong, shared under a Creative Commons license