Wal-Mart to be hit by massive sex discrimination lawsuit 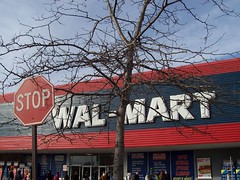 Up to 2 million women may now sue Wal-Mart for sex discrimination, after a US court ruled that a class-action lawsuit against the retail behemoth could go ahead.

The Independent reports that an original complaint by six women, who accuse the firm of passing them up for promotion in favour of male colleagues, could theoretically be joined by all the women who have worked at the store since December 1998.

Of course, the women involved in the lawsuit now face the task of convincing a court that they have been discriminated against, but they will not be forced to each sue Wal-Mart individually.

Wal-Mart, of course, is trying to wriggle out of it, but apparently legal experts don’t think they have much chance of getting the decision overturned:

Legal experts now say it is unlikely a superior court would overturn a ruling upheld twice in lower court. “The evidence, we think, is very strong. It is time for Wal-Mart to face the music,” said Brad Seligman, lead lawyer for the six plaintiffs. He was ready to discuss with Wal-Mart an out- of-court settlement with the company – the usual way such class-action suits are resolved.