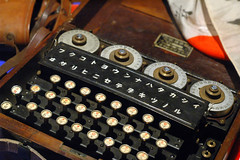 A female programmer has won the A. M. Turing Award for the first time.

The LA Times reports that Frances Allen, “whose work helped crack Cold War-era code and predict the weather” is one of the few individuals to ever be awarded the $100,000 prize.

Allen, who is now retired but spent her entire career as a programmer for IBM, has won other awards:

One of them, won in 1968 for her research, came with a prize: a pair of cufflinks and a tie clip.

“No woman had ever won that award before,” Allen said Tuesday, chuckling, from her home in Croton-on-Hudson, N.Y.

Two decades later, when she was named the first female IBM Fellow, her award certificate recognized the recipient for “his accomplishments.”

“These anecdotes are funny, but they do represent having to break through a lot of walls that still exist today,” Allen said. “I believe we’re moving into a whole new era for women in our field.”

But female computer scientists are still thin on the ground. Believe it or not, your humble blogger once had aspirations to follow in her father’s footsteps and become a programmer. But somehow it fell by the wayside, when I realised I’d have to carry on taking maths.

In similar news, however, I went to the Shiny Shiny awards last night, and it was great to see that the majority of awards were collected by women working in the technology sector, in fields as diverse as gadgets, mobile phones and gaming.