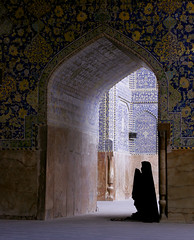 The introduction of female priests in Morocco looks set to cause controversy in the Islamic world, according to a report by the BBC.

These female priests, know as the Mourchidat, are the first ever to be invested with the authority to perform the same functions as a male Imam. The Mourchidat are allowed to provoke religious discussions and to give advice to women in the community, although they are still prohibited from leading prayers, a privilege which will continue to be reserved for men only.

To date fifty Mourchidat have graduated and begun their ministries, marking the increasing status of Islamic women in a culture traditionally characterised as patriarchal.

Following the devastation caused by the suicide bombings of May 16 2003, the Minister of Islamic affairs, Ahmed Toufiq, believes this is a necessary measure to promote a more liberal form of Islam, with the hope of eradicating religious extremism and terrorism, and propagating a healthy society.

This move has already received harsh criticism from Abdelwahed Motawakil, the Secretary General of the outlawed Islamic movement, Justice and Charity. Justice and Charity is very anti-establishment, campaigning for the abolition of the monarchy, and considered to be a threat to the Islamic status quo.

Abdelwahed Motawakil believes that although the introduction of women priests is promoting gender equality, it has been introduced as a form of government propaganda:

If you take the idea in the abstract, I must say that it’s an excellent idea, because it gives an opportunity for women to participate in an area that has been monopolised by men…But if you look a little deeper and analyse the motives, you will find out that it is part of a strategy adopted by the regime to control the religious field and not to leave that field open for their opponents – the Islamists. So they want to control that area and convey their official view of Islam.

We will have to wait to see how this debate unfolds, but, whether or not this government measure has been implemented with an ulterior motive, it cannot be denied that this move will help to break down gender stereotypes and give Islamic women the opportunity to do something that they were previously denied.

Photo by Karl O’Brien, shared under a Creative Commons license