Women to be admitted to the Royal Hospital 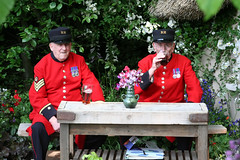 The Royal Hospital, traditionally home to the Chelsea pensioners, is to open its doors to women as of 2009, according to a report by the BBC.

The hospital has been home to male veterans for in excess of 315 years, and this recent decision to allow women to walk the hallowed wards marks a progressive movement in the breaking down of patriarchal tradition.

Former servicewomen will be admitted in two years time, and accommodated in the Sir Christopher Wren building, which is to shortly undergo extensive renovation work (predicted to cost £35m pending funding) to introduce en-suite facilities.

Like their male counterparts, known officially as In-Pensioners, the female veterans must be over 65-years-old and entitled to an Army pension. They will also have to appropriate the same dress as the men, wearing blue tunics while on the grounds and scarlet coats when they are outside.

Hopefully this resolution represents a changing attitude towards the status of women in the armed forces, and it is encouraging that the 300 elderly inmates currently homed in the hospital have given their full support for these changes, with Paul Hatt, Hospital Secretary and Director of Administration, remarking that:

“The In-Pensioners have been consulted and fully support this move.”

This is particularly poignant considering that these men have lived through times of intense female repression, and raises the question, in order to achieve equality and change the status quo, do we first need to go back and re-educate the source? The changing attitude of this hospital is monumental, giving elderly servicewomen the recognition they deserve.

Photo by Leo Reynolds, shared under a Creative Commons license (we should be seeing a few female Chelsea pensioners walking around London in their uniforms in the future)