An incredible 97% of British women think those who wear a Size 12 are “officially overweight”, according to a poll in New Woman Magazine.

But before I get on to that mind-boggling statistic, let’s see how The London Paper covered the story. You might remember that a few days ago, the free tabloid carried a vicious and spurious attack on Kate Moss on its front page, which attempted to cajoul its female readership into celebrating Moss’ “chunky” thighs.

How, then, do you think they would report a story like this poll? Shock and horror, of course! 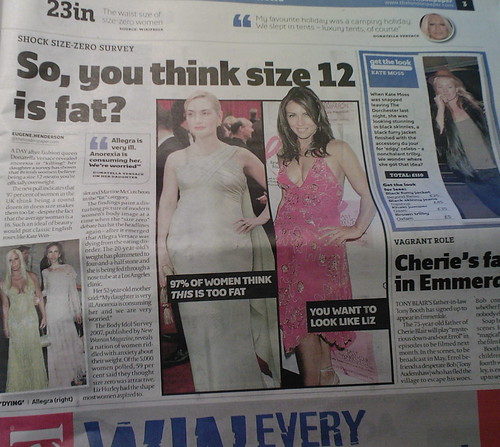 Over a photo of Kate Winslet looking gorgeous as ever, The London Paper prints: “97% of women think this is too fat”. Not that this newspaper has any role whatsoever in perpetuating the idea that the tinniest sliver of fat is totally unacceptable – not to mention front page news. Butter wouldn’t melt in this editor’s mouth.

To add an extra layer of irony to this charade, on the same page, the paper shows a photo of the aforementioned Kate Moss, looking extremely skinny, and explains how to replicate her look.

Now then, back to the survey. The Daily Record reports more of its truly horrifying findings.

If you thought it couldn’t get any worse, you’re wrong.

Six out of 10 women say their so-called friends have criticised their body shape and four out of 10 say even their mothers urge them to lose weight. A fifth say they can’t sit at their office desk without their colleagues suggesting they slim down.

But the pressure is really on when it comes to a big night out. A shocking half of all women go without food all day so their stomach is flatter and one in 10 makes themselves physically sick so they can fit into a party dress.

Some go to even more extreme measures to slim down, with 13 per cent admitting they take speed or cocaine to speed up their metabolism, while 37 per cent have taken slimming pills and 11 per cent have bought diet drugs on the internet. Overall 84 per cent of women say they would feel “much happier” if they lost weight and think about their body size every 12 minutes.

Every 12 minutes! It’s just sickening how much brain power, energy and talent is going to waste while seemingly the majority of women spend their day obsessing about their waist-line.

And it’s not just wasted time, it’s the realisation that this sitation is making millions of women chronically unhappy.