An equation for prostitution? 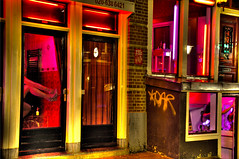 Economists have come up with a mathematical equation which they say explains prostitution, reports The Guardian.

The other economists concentrate on gender, pay and the “nature of forgone earning opportunities of prostitutes and clients”. But, say Della Giusta, Di Tommaso and Strom, those don’t count for much. What really matters is the economic role played by stigma and reputation. And the simplest, best way to explain that is with mathematics.

U is your satisfaction. It’s what you, as a prostitute, care about – the satisfaction you gain from selling your services. Economists like to call it “utility”, which is why they like to use the letter “U”.

L is the amount of leisure you have.

C is the amount of goods and services you, as a consumer, consume.

S is the amount of prostitution you, as a prostitute, sell to your customers.

W is the going price for prostitutes.

R is a measure of your reputation.

The whole situation, seemingly so complicated, boils down to a nice partial differential equation. Here it is – a Della Giusta, Di Tommaso and Strom’s rule of thumb for prostitutes. You, a prostitute, find it worthwhile to sell your services when:

All of which, of course, is totally ridiculous. According to these economists, either:

b) There are a pre-existing cache of prostitutes floating around, just waiting for the economic conditions to come together to make it worth-while to sell sex. Where do they come from? Who knows. Like bananas, prostitutes are just a natural resource to be exploited, that appears from no-where, with no explanation.

I, for one, would like them to add the following variables:

SS – sex slavery: a huge proportion of prostitutes are not working in the sex industry out of any sort of choice, or need to buy goods, but because they have been trafficked into the country and forced through one means or another to service “clients”

O – the objectification of women, which leads people to think its perfectly OK to buy and sell human beings, and creates

D – demand from men who don’t mind sexually exploiting women, or even, if SS comes into it, effectively paying to rape them

L – lack of opportunity, which can be one reason that women end up in prostitution

P – for both poverty and the patriarchy, without which the sex trade would not exist – or, at least, would be transformed beyond recognition.

Whatever your opinion on the legalisation of prostitution, and sex work generally, these economists have ignored huge swathes of issues relating to the reasons behind why someone would get involved.

Photo by Stuck In Customs, shared under a Creative Commons license