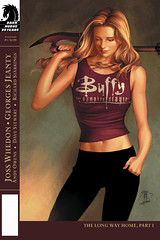 Season eight of Buffy the Vampire Slayer has just started.

OK, the TV show itself isn’t back on our screens, but creator Joss Whedon has revived the story of the Slayer one last time in a series of comics.

As with any comic book adaptation of a TV show, there are some things that just don’t translate.

For a start, don’t expect Buffy to look like Sarah Michelle Gellar. On occasion, the artist gets it right, but most of the time the resemblance is far from uncanny. Xander is more recognisable, but Dawn is way off.

And the format is much shorter. One issue is only a few pages long, really, so there’s not much time for subplots, or even plots as such.

For some reason, Buffy has swapped her usual sartorial good taste for a standard-fare comic book outfit of skin-tight body suit and strappy things.

But the one-liners are brilliant as usual, and every word comes straight from Whedon’s pen, so it is a cut above the other “Buffyverse” comics, books and videogames out there. And, of course, the book is set to be populated with strong, funny female characters. It’s enough to make you want to dig out that box set again…