Feminism? No, not today

Last Thursday, as part of Women’s History Month, students at the University of Wisconsin Oshkosh were encouraged to spend the day pretending that the feminist movement had not occurred, according to a report on the University’s student newspaper. 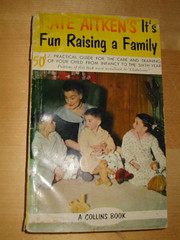 This was an exercise devised by staff in an attempt to show pupils what the feminist movement has achieved for women, demonstrating the disparity between the daily struggles faced by those living in ‘pre-liberation’ America with those of women today.

In 1914 in the former Oshkosh Normal School, for example, female students were only allowed to study Cookery, Sewing, Dressmaking, and Hand and Machine Sewing. Between semesters they were expected to take courses in “domestic sciences” to consolidate their classes and to help build a nation of dutiful little housewives with a penchant for cross-stitch and the ability to baste a turkey at twenty paces, whilst blindfolded with a babe at the breast, and baking a pie for the in-laws. We are naturally multi-taskers after all, right?

“A Day Without Feminism” was an idea developed by Professor Michelle Kuhl, and encouraged both male and female students to regress back to the times when a woman was expected to be a wife and mother, and a failure if they chose not to do so. Women were expected to stay out of bars, sit silently at the back of the class room and wear skirts, whereas the men had to open doors for ‘the fairer sex’ and assert their positions as the primary breadwinners. Somebody change the record, please?

Professor Kuhl was keen to initiate this day as she felt that there was a general lack of appreciation for the changes that have taken place, and the increasing recognition of women as being as valid members of society as men:

“Women today don’t appreciate what feminism has done in their lives…Life was hard for women. Just the privilege of wearing pants (is taken for granted).”

Although this was a wonderful way to pay homage to the women who fought tirelessly during the first and second wave of feminism to reach some sort of parity with men, I cannot help but question what the implications of this day really are?

OK, we can now study what we want, and more and more young women are not feeling stifled by the preconceptions as to what they can achieve owing to their gender, but does the fact that university students can easily fall back into traditionally oppressive modes of behaviour indicate that the equality we have achieved has not yet completely permeated the fabric of society? That it is still something not considered the norm, something that can be reversed more easily than we can move forward? Is it only when we feel we don’t have to celebrate our increasing status, that we will have truely achieved the equality we should have had since Adam and Eve pranced around the Garden of Eden partaking of an apple or two? I think that probably it will be, since by that point the idea would have permeated the national consciousness so effectively that the possibility that this was not always the case will seem ridiculous.

Yes, we have a lot to thank women in the past for, but for Professor Kuhl to infer we should be thankful for the “privilege” of wearing pants, something that for men is just a given, considered the norm, does nothing but strengthen the idea that it was not something for which we should have been automatically entitled to do.

It’s unfair that we are constantly made to feel that we should be thankful for the social changes that have taken place over the last century, since most of what our predecessors, and we, fought and continue to fight for, are for rights we should have not even been an issue and just part of our daily lives, as they were for our male counterparts. We should celebrate our female foremothers who had the vision to see that we should have more, but never thankful for our oppressors finally conceding that they are wrong and giving us what should have been our anyway. We have fought for everything we have and continue to fight the good fight so that for those who begin this universal struggle after us, this will no longer be an issue.

Photo by Ann Douglas, shared under a Creative Commons License