The French culinary world has been thrown into turmoil recently owing to the success of a female chef, according to a report in The Times today. 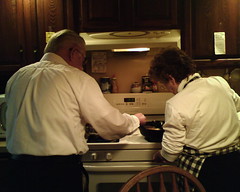 Anne-Sophie Pic is rapidly becoming a celebrity chef in France, where, in the Rhone city of Valence, she runs the family business, the Maison Pic, organising a staff of twenty on a daily basis. According to the article, Pic’s popularity has emanated from her excellence in a profession largely dominated by men in France, recently earning her a third Michelin star. She is the first woman to win this much-coveted accolade since 1951.

The French vocabulary still lacks the proper word to describe a female chef, demonstrating perfectly how repression can begin at the level of language.

Personally what I found most interesting was the way in which The Times reported the story, with journalist Charles Bremner describing Pic as being:

From the outset she is defined by her physical attributes, with her achievements countered with stereotypical feminine descriptions. This is patronising, negating her position by implying that she should not only be praised for her achievements, (and for reaching the top in a profession dominated by men), but also that she should be commended for doing it whilst still looking pretty. The impression we get is that Pic should be praised for becoming so successful in spite of her femininity, as if this was a disability, or something she had to overcome.

The journalist goes on to remark that “she hardly looks the classic kitchen boss,” but what does the classic kitchen boss look like? For years women have been repressed on a domestic level, considered the only family member who exists exclusively to cook and clean for the family, although now the very idea is something that is considered shocking, but why? Is it because assumptions made on the basis of our sex have become redundant, that the preconceptions one makes about gender roles have become interchangeable? Unfortunately not, but what it does show is the reluctance for society to accept women as being ‘the best’ at anything.

When women were confined to the home, slaving away over a hot stove, on a budget that tested how creative they could possibly be with a turnip and a couple of spuds, it was fine for the kitchen to be considered the female realm. Now, however, that the role of the cook has become glorified by popular culture, with TV shows attracting huge audiences, it has, in the public sphere, become a profession associated with men and social sophistication. When cooking was purely a functional action it was something us women did, whereas now it’s considered an indication of style and class, it’s something the men have taken as their own; it’s now a highly-respected profession even though for many years it was just considered as being something we did. How convenient.

Photo by mamamusings, shared under a Creative Commons license