German girls to be given cervical cancer vaccine 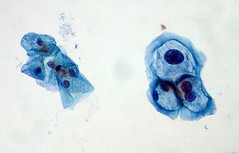 Germany is the latest country to recommend the use of the HPV vaccine to protect girls against cervical cancer, Speigel International reports.

The German Standing Vaccination Committee (STIKO) officially recommended Monday that all girls between the ages of 12 and 17 be immunized against human papillomavirus (HPV), which can cause cervical cancer.

The three-dose vaccination cycle will cost about €500 ($667), and will be covered by German state insurance companies. Girls should receive their vaccinations before they become sexually active, which will be an opportunity to “round out” the list of other recommended immunisations, STIKO says. Though men can also carry HPV, STIKO has not recommended that boys be vaccinated.

The only downside is that the vaccine will not be rolled out in a mandatory, nation-wide programme. And, although 12 year old girls will be given the jab for free, older girls will have to pay for it.

Still, this is a great move in the right direction. It is also encouraging that, unlike in the US, German conservatives are not up in arms about the decision. Instead, parents are annoyed at the cost of the vaccine:

The newspaper Frankfurter Rundschau reports that insurance companies and customers are irritated by the vaccine’s high price tag. Sold for about €270 in the US, Cervarix costs €450 — not including doctor’s fees — in Germany.

Photo by euthman, shared under a Creative Commons license