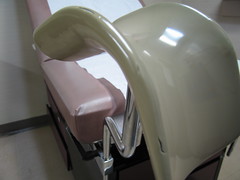 It turns out that up until recently it was common practice in the US for medical students to practice pelvic exams on unconscious female patients before surgery, without their consent.

Rachel over at Women’s Health News has the full story, based on a recent academic paper about the history of gynaecology training (via the latest Feminist Carnival).

According to the piece, “Academic gynecologists were accused of using patients as unwitting “training dummies” — a reaction exacerbated by the report’s revelation that students who had completed an Ob/Gyn clerkship were less likely than other students to believe it is important to obtain the patient’s consent for such an exam.”

Yep, that’s right. Unsurprisingly, medical students who are taught that it’s A.OK to effectively assault an unconscious woman and call it education go on to become doctors who don’t think getting a woman’s consent before examining her is important.

The study cited (2) found that only 51% of those who had completed an OB/GYN clerkship thought consent prior to pelvic exam was “very” or “somewhat” important – 24% were “neutral,” 15% found consent to be “somewhat unimportant,” and 9% thought consent was “very unimportant.” Those who had not done an OB/GYN clerkship were only somewhat better on the issue of consent, with just 70% stating it was “very” or “somewhat” important – still far short of the 100% consent women might reasonably expect. Interestingly, the survey was conducted in 1995, but this paper reporting the results wasn’t submitted until 2002 or published until 2003. Women familiar with the practice of performing pelvic exams without consent may assume it happened “a long time ago,” but these findings suggest otherwise.

And it gets worse:

“This stance rankles physicians who downplay this distinction — particularly those who are uncomfortable asking their patients to give written permission for a medical student to perform an operating-room examination. Patients, they argue, are already nervous about surgery, especially when they must sign the surgical consent form describing everything that can go wrong; the last thing they want at that point is to be asked to allow a medical student to examine them.” This paternalistic attitude is extremely troubling, a sign that some physicians think women shouldn’t have to worry their pretty little heads about what might be done to them without their knowledge while they’re knocked out in a hospital. Rather than coming to the conclusion that the exam should then not be performed without explicit consent from women, individuals and institutions have in the past jumped to the conclusion that they simply shouldn’t ask or tell when violating women’s vaginas.

Even if you accept the highly questionable need to sexually assault women in order to train doctors, as one commenter points out, these medical students are missing out a major part of their training:

what benefit is their to a medical student learning on someone who is completely relaxed and unaware? Better to learn on patients who are awake and nervous as those are the ones they will have to perform most pelvic exams on anyway.

Also, it is time that phyysicians learned how to perform a SENSTIVE PELVIC EXAM ON ALL WOMEN.

Rather than ask women to give their consent to an exam, or employing a willing volunteer, some hospitals adopt less-than-perfect technological alternatives.

If anyone has any ideas about whether this happens in the UK, please get in touch via the comment form on the right.

Photo by -Master Shake-, shared under a Creative Commons license