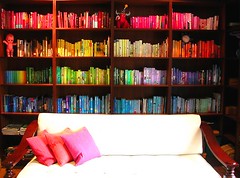 Novelist Muriel Gray has said that the entrants for the Orange Prize for women’s fiction lack imagination and are too personal in their focus, The Independent reports.

Can I just say right away: why have they got an author who writes pretty appalling fantasy books to judge a serious literary prize? No-wonder an author who writes about ancient Native American spirits causing havoc in a ski-resort hasn’t got much time for contemplative fiction which concentrates on everyday life.

Now I’ve got that out of the way, on to the bigger question: her faulty arguments.

Women writers don’t work hard enough to escape from their own gender and circumstances – in short, says Gray, they’re failing to make things up, surely a prerequisite for good, absorbing fiction. She’s coined a phrase, rural schoolteacher syndrome, to describe the phenomenon: “the delusory condition that fools the sufferer into believing that an experience, say as ordinary as being a rural school teacher, is so interesting and unique that it’s almost compulsory to chronicle it … thinly disguised as fiction”.

The Independent points out that there are actually plenty of very imaginative female authors out there. JK Rowling is one of the richest women in Britain, after all, and she wrote about wizards.

But I think this betrays a bit of a misnomer – you don’t have to be writing about fantastical events to be imaginative. You’re just choosing to direct your imagination in a different sphere. You only need to check out the male-dominated Pulitzer Prize winners to see that. Indeed, rarely is serious fiction given to outrageous flights of fancy. Sometimes, but rarely.

The only one of Gray’s books I’ve ever read is The Trickster. The subtitle glows “HELL HAS NEVER BEEN SO COLD”. Sorry, couldn’t resist.

Another one of her criticisms was that women don’t write proper male characters. As The Independent points out:

It is strange to see Gray citing this as a self-evidently good thing. Generally writers, male or female, are not at their best when cross-dressing. It’s unconvincing at best, absurd or embarrassing at worst – remember Martin Amis’s female police officer in Night Train? Or Sebastian Faulks’s Charlotte Gray, perpetually fiddling with her historically researched underwear? If anything, male writers are worst at this, tending to fall into the “adjusting my thong and wondering whether it is time to change my tampon” trap.

Given the greater weight given to male writing in our society, I personally figure we’re due at least 100 years of properly realised female characters, who actually speak in a recognisable voice, before this becomes a problem.

Photo by chotda, shared under a Creative Commons license