A Polish woman has been awarded 25,000 euros ($33,000; £16,000) in damages by the European Court of Human Rights after she was refused an abortion to the detriment of her eyesight, according to a report by the BBC. 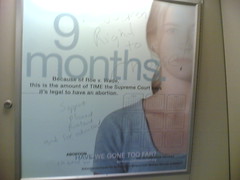 Alicja Tysiac lives in fear of becoming blind, since her vision has deteriorated significantly since her third pregnancy. Eye specialists warned that a third pregnancy could cause her to go blind, but in spite of this knowledge neither the specialist nor her GP would authorise a termination.

Poland is a devoutly Catholic country, and abortion is illegal unless it can be proved that to proceed with the pregnancy would be extremely detrimental to the health of the mother or the developing foetus.

Following the birth of her third child Alicia Tysiac suffered a retinal haemorrhage and she now has to wear thick glasses, although she is unable to discern objects over 5ft away from her.

The Strasbourg Court found that her human rights had been violated when she was denied and abortion on therapeutic grounds, although this has not lead to a reassessment of the country’s strict anti-abortion laws. Right-wing activists are hoping the laws will become even more stringent, and this case highlights the difficult Polish women faced in trying to procure an abortion.

This case is particularly interesting in light of the recent discontent surrounding the more liberal attitude towards abortion in the UK, and is foreboding of the difficulties women will have to face if we are denied the right to choose as so many anti-abortion activists are hoping.

Photo by termie, shared under a Creative Commons License