Could Britney Spears be the feminist icon of our generation? 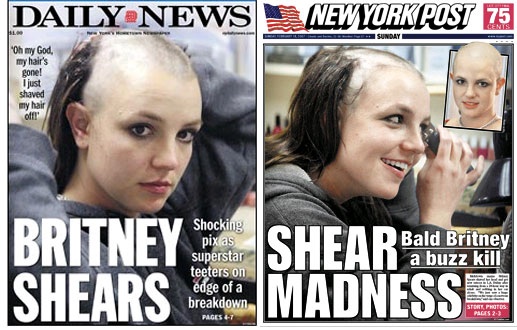 According to the gossip mags and general popular opinion, Britney is apparently going mental on drugs, partying and most disturbingly of all, shaving her hair. The tabloids, the broadsheets, TV news reports and even Charlotte Church are lining up to slag her off. Personally I think she kicks ass: here’s why.

Britney Spears started out at four years old taking part in local, down South, gymnastic competitions. When she went on her first date, she says she stank of fish because she worked weekends at a fish shop and needless to say, the date wasn’t that great. From such seemingly humble beginnings she rocketed herself into stratospheric stardom and has managed to sell over 76 million records world wide, is the eighth highest selling female artist in America ever, and her second album broke the then record for first week sales. Oh, and she is the only female woman in music history to have her first four studio albums all debut at number one. She is also the youngest ever musician to have a star in her honour on the Hollywood hall of fame. But even if all her material success doesn’t impress you, her subversive actions much discussed in pop culture should.

Western society has always used the accusation of madness to condemn any women who behave outside the constraints of what men think women should look like, dress like, and how we should behave

Britney cheated on that smug weasel Justin Timberlake and then wore a t-shirt that read “Dump him” in front of the world. Previously, she swore she was going to stay a virgin until marriage, and then fucked him anyway. She got off with Madonna in an unashamed publicity stunt at an awards ceremony – who even remembers that her clone, Christina Aguilera, did the same afterwards? When driving around for burgers with her mum, sister and various hangers-on, she throws milkshakes at paparazzi for the hell of it.

And while going on worldwide tours, winning Grammys and a multitude of other awards, she got married in Vegas and divorced 55 hours later, then picked up the vile, quintessential bad boy wannabe ‘K-Fed’, married him, had two of his kids and then dumped him via text message.

She’s frequently touted as a bad mother, because she once drove away from photographers with her baby on her lap. That’s the worst thing she’s ever done. Yet this was headline news, causing untold consternation and concern for the welfare of her two children.

Am I the only person who thinks that having a short haircut is not that crazy?

Male stars in the public eye can be well known for their drug habits, philandering, punching photographers, getting into brawls and so forth and no-one even remembers that they are fathers, let alone that maybe they might not be setting that good an example to their children. But Britney is a terrible mother. WTF? She’s religious, has no proven drug habit, has plenty of money to support them and loves them dearly. It’s blatant gender bias – and everyone swallows it.

Her detractors claim she spends way too much time partying and not enough time at home with her kids. Never mind all the male rock stars that have countless kids and promptly abandon them. At least Britney is fighting for custody of her children, even as she stumbles out of nightclubs flashing her fanny and wearing low cut dresses that display her mummy-size tits in all their milky glory, swapping stockings with Paris Hilton.

Britney is punk rock. Britney has tattoos, piercings, perfumes. Britney is intent on having her cake and eating it too – put that in your pipe and smoke it Courtney Love. Britney sold a storm and then shaved her head. Well, many women get a new hairdo after the end of a serious relationship. But Britney walked into a hairdressers, asked for her locks to be shaved off and, when the barber was too chicken to do it, she shaved her hair off herself.

Britney is she is a useful template for all the media want to criticise young women for. She has children, a career and a social life

If you look at the photographs of her doing so, you’ll see she was smiling as she cut off her hair – which had been damaged from frequent bleaching and extensions. Smiling and looking incredibly beautiful. She spat out the male perception of femininity.

The world has gone up in flames worrying about Britney’s mental health. It was on page three of The Observer. Erm, am I the only person who thinks that having a short haircut is not that crazy? It’s just hair. It will grow back. But, of course, the media are keen to seize any reason to say Britney is unhinged. Western society has always used the accusation of madness to condemn any women who behave outside the constraints of what men think women should look like, dress like, and how we should behave.

The reason the media hurl so much criticism at Britney is she is a useful template for all the media want to criticise young women for. Despite the oft-proclaimed notion that feminism is a dated movement that ceased to be relevant once we’d won the vote and got the Pill, Britney-hating and hatred of all the other female celebrities that cover our magazines, such as Paris Hilton and Lindsay Lohan, is merely thinly disguised misogyny. Britney is slated because our society does not like women to have children, a career and a social life. That’s too much; she must be crazy. What’s more, she’s poor white trash and won’t hide it; her wedding to Kevin was a working class extravaganza; the male guests wore jackets with ‘pimp’written on the back, the dinner served was chicken and burgers, and after the ceremony Britney changed back into sweatpants.

Britney states: “I am a good person and a good mom.” Damn straight she is. But I think she is a lot more than that. If feminism means rising to the top of your professional career and smashing straight through that blasted glass ceiling, if feminism means having sex with who you want, when you want, and having children when it suits you, and having your slimy ex look after the kids while you go out on the town, if feminism really just means freedom for women, then its clear Britney is ticking all the boxes. Britney is original, fabulous, and most importantly good at what she does. She is a superstar as well as promoting the aims of feminism and therefore I’d like to crown her as my very special, number one, “I don’t need permission” Feminist Icon. I just can’t wait for her inevitable spectacular comeback. Britney, you rock.

Theadora Jean is a woman who writes, reads, rants, rides a bike, rows with men about anything, robs from the rich to give to the poor, wants to start a revolution and likes dancing on Saturday nights.