Spain to introduce ‘Law of Equality’

The Spanish parliament recently announced plans for a new law, which will be implemented at the end of March, which aims to encourage women to enter the political sphere and the world of commerce, according to a report by the BBC. 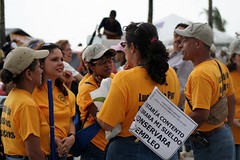 Women continue to be underrepresented in politics and business, and it is encouraging to see such affirmative action being taken to make, what are considered to be traditionally male professions, more accessible to women in Spain.

Under the Law of Equality, political polities are legally required to run female candidates in at least 40% of the seats that they contest, except in small towns. Companies are also expected to negotiate “equality plans” in order to elevate the status of women in business. New fathers are also recognised under the law, and are now entitled to 15 days paternity leave.

Prime Minister Jose Luis Rodriguez Zapatero, who has included 8 women in his 16-member cabinet, has focussed on addressing gender inequality since he came to power in 2004, hope that under this new low Spanish society would be “changed for the good, radically and forever.”

Although the main opposition Popular Party abstained from supporting the law, it is encouraging that on the whole the need to address the lack of women in these professions was identified. Yes, this progressive attitude should be commended, but it seems that the more we push for equality in this way, the more we can sometimes become isolated in the workplace.

Take the recent controversy surrounding the working mother, for example, with evidence showing the reluctance of employers to give opportunities and promotions to women who have children or who happen to be of child-bearing age. Legislation initially introduced to protect us, has become bitterly resented by employers, who find laws governing maternity entitlement a financial burden, meaning that we are now victims of bureaucracy rather than the benefactors.

Let’s just hope that women in Spain are able to take advantage of this law profitably, but that, on the whole, we continue to be valued for the contributions we make to our chosen professions and commended for our hard-work, talent and skill rather than being constantly evaluated on the basis of our gender. We are constantly made to feel like we should be appreciative for the opportunities seemingly ‘given’ to us to do these things, when in reality all they demonstrate is how we are devalued and not legitimately allowed to demonstrate of what we are capable unless there are laws introduced to say we can do so.

Photo by Oscalito, shared under a Creative Commons License