The Mechanics of Femininity

I recently encountered a number of incidents with relation to my car which made me think about how society still sees women and cars as an unnatural combination.

My car needed a new exhaust so I drove into the nearest exhaust centre to get it sorted. I happened to have a man with me at the time, which was not a conscious decision, just a coincidence.

Whilst discussing the problems with my car with the mechanic, I noted that despite the fact that a) it was my car and b) I was the one answering his questions, he never once looked at me or directed any of his questions at me.

This really infuriated me, but the man made me feel so unimportant that I found myself unable to confront him. This male mechanic treated me as if I were invisible and seemed to truly believe that under no circumstances could I have understood anything to do with the mechanics of my car.

Granted, I don’t know anything about cars, but neither did the man who was accompanying me, therefore it was extremely unacceptable to assume that he would be more knowledgeable than I would. And you would have thought the mechanic would want to consult with me on the repairs seeing as I would be the one paying for them. 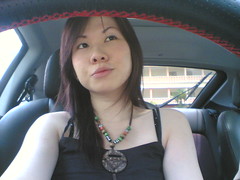 Not long after this incident, I decided to buy a new car and went on the hunt around the various car showrooms in my area. I took my dad with me, not because he is male, but because he does know about cars and I therefore valued his advice. However this time I experienced a further kind of prejudice.

As I had experienced previously, all the questions made by the salesmen were directed at my father as opposed to me. But these were not questions about car mechanics, but more about how much money was being spent.

The only questions aimed at me were insulting ones such as what colour car it was that I was looking for. The salesmen not only seemed to be under the assumption that I didn’t have my own money and that it was ‘Daddy’ buying his ‘little girl’ a new little run around, but that I would make my choice on such an irrelevant thing as colour.

Despite the fact that I am 28 years old, have a career and make my own money, I got the distinct impression that the salesmen seriously couldn’t imagine that I had my own money to spend, being female. Furthermore I realised that they were obviously certain that my car knowledge was non-existent due to the fact once again that I was female.

Then there is the type of car that I purchased. I happened to buy a car that has a button on the dashboard that is referred to as a ‘girlie’ button, which is supposed to help with parking.

There is a constant suggestion that women get lost on the roads due to their poor map reading skills, hence the need for satellite navigation

This naming of one of the car functions makes the immediate suggestion that women are incapable of parking. When this car was originally advertised some time ago, the labelling of this function was, I presume, to attract female buyers and I would imagine it did so. However if women actually stopped and thought about it for a minute they would see that it actually demeans the function of the button by labelling it ‘girlie’ and furthermore demeans women by reducing them to the immaturity of youth by referring to them as girls.

This then opens up the wider assumption that women are automatically seen as bad drivers. This assumption in itself has been so ingrained into my own mind that I have to admit to finding myself shouting about women drivers when I have an altercation on the road and I am shocked that I let such a statement leave my mouth. It is not being female that makes you a bad driver, but poor and lazy driving, which is frequently demonstrated by both of the sexes. However women have been labelled this way in order to reduce them to the inferior sex once again, something that just gets accepted as the norm.

Another feature on many cars is satellite navigation, which is again something that I feel is aimed at women, because women apparently can not read maps.

Now I totally admit to saying that I can’t read a map but this has absolutely nothing to do with the fact that I am female. The reason is simply because I am plain lazy and can’t be bothered to try, which I am sure is the case with many men also.

However there is a constant suggestion that women get lost on the roads due to their poor map reading skills, hence the need for satellite navigation. However, from my own personal experience I find that it is more often men that seem to get lost whilst driving, due to their insistence that they know the way and their own stubbornness in refusing to use a map. Whereas women on the other hand, more often than not, actually plan their route prior to the journey and not part way through it.

It does seem that even in today’s society there is still a massive assumption that car knowledge and the ability to drive is somehow ingrained into men’s genes from birth.

It is the individual’s choice as to the level of knowledge and experience they have with respect to motor vehicles. I am not a great example as I choose to know nothing about cars, however the assumption that all women are novices and all men are experts is far from the truth and needs to be removed from society’s view.

Emma Hadfield, 28, is currently brushing up on her car knowledge and plans to start a campaign to remove the word ‘girlie’ from the English vocabulary.