The Rabbi’s guide to oral sex? 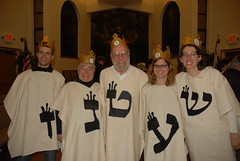 Here’s an interesting column over at Faithhacker about whether oral sex for women is permitted under Jewish law.

Although some of the arguments are rather unfortunate/utterly misogynistic – for example, comparing women to meat and fish – I suppose you’ve got to give them credit for coming up with a workaround.

About ten minutes into the discussion one of the women brought up oral sex, and the conversation went something like this:

Various Middle Aged Women: “Well that’s not allowed, is it?”

“Not for men, because they can’t spill their seed, but for women it’s okay.”

Chabad Rebbeztin: “Actually there’s a prohibition against a man looking at his wife’s sexual organs.”

Long uncomfortable pause during which I consider fleeing.

Eventually I extricated myself from the conversation, but since then I’ve been a bit concerned about this. I keep imagining signs: Warning: Do Not Look Directly at the Vagina. In the admittedly crude words of a friend of mine, “Blind muff diving? That won’t end well.”

I’ve actually just been interviewing feminists in Israel – including some Orthadox Jews – so this was pretty interesting. I admit, I didn’t ask about their sex lives. Maybe I should have! Fox doesn’t seem that concerned:

I find all this amusing, and ultimately comforting since it seems like the wives of all these rabbis (with the exception of poor Mrs. Dahabi) were getting theirs pretty regularly.