Women turn away from politics, but why? 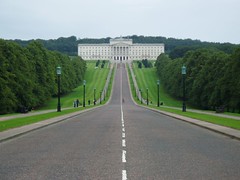 Women continue to be under represented in the political world according to a report by the BBC today.

The number of women standing in this week’s ballot for the Northern Ireland assembly has plummeted since the last poll in 2003, highlighting again the need to make it easier to stand as a representative and to raise the status of female candidates.

Women into Politics, an independent group aiming to encourage the steady integration of women into this sphere, claims that this is disappointing, since in 2003 women achieved only 18 of the 108 seats available. With the number of women standing having fallen this year, this number looks set to drop significantly.

The organisation’s May de Silva believes the problem emanates from the fact that:

“Political parties have a tendency to put forward their ‘familiar faces’ for TV and media interviews, most of whom are men.”

Men have dominated government ever since it was established, and politics continues to be considered another facet of the male realm. It is ironic that Margaret Thatcher, the only ever female Prime Minister, is regarded by some as having been the best ever leader of the nation, although her female predecessors continue to be isolated and excluded from a world in which she excelled.

But, having been immortalised as the ‘Iron Lady,’ it is significant that Thatcher is interpreted as being in possession of distinctly masculine qualities, which are regarded as being responsible for her success. She is not described as displaying the stereotypical feminine qualities we conventionally associate with women, and her success is almost completely attributed to her supposed adoption of male modes of behaviour.

What this demonstrates is that good leadership skills, confidence and the ability to make positive changes for the future are qualities not exclusive to the male sex, and that to think so is an outdated farce. Women in possession of such character traits are no less feminine than those who more readily conform to the societal template as to what constitutes feminine.

What this news has done, however, is to raise the question that if more women are permitted entry into the world of politics, will this precipitate a faster movement towards equality with men? Probably.

Photo by horitzons inesperats, shared under a Creative Commons license