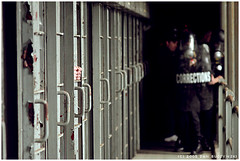 Women’s prisons should be shut down for good, according to a report out today.

The government ordered Baroness Jean Corston to undertake the report in the wake of six deaths at Styal prison, and she has concluded that the current system of women’s prisons should be abolished within a decade.

Baroness Corston, called for a cut in the numbers of women jailed, with a far greater use of community punishment.

And she argued that the most serious female offenders should be sent to specialist units near to their homes instead of large prisons. There they would be helped to beat drink and drug habits, receive counselling for mental health problems and be encouraged to get educational qualifications. She said: “Many of the women in prison are troubled, rather than troubling. They are damaged rather than damaging.”

The move would also allow them to maintain contact with family members.

There are 4,329 women in jails in England and Wales, double the number since the mid-1990s, many serving short sentences for relatively minor offences.

Of these women, about 40% are serving sentences of less than four months for minor crimes such as shoplifting.

Photo by macwagen, shared under a Creative Commons license