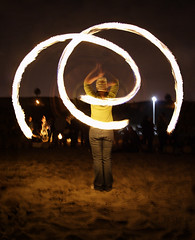 Welcome to the 35th Carnival of Feminists!

We’ve had a blast putting it together, and hope you enjoy it.

First up, since the last Carnival it has been impossible to escape from the issue of harassment of female bloggers. As feminist bloggers, we get our share of abuse, but any woman who makes her voice heard on the internet is liable to be targeted.

Most recently, the problem was brought into sharp focus by the case of Kathy Sierra, a female technology blogger at Creating Passionate Users. Earlier this month, she began receiving death threats and intimations of sexual violence, not only in comments on her own blog but also on other blogs.

Intimidated by the online attacks, Sierra felt forced to cancel speaking engagements and take a break from blogging. Her situation has precipitated a storm of comment – mostly, but unfortunately not all, supportive – from across the blogosphere, as well as being widely reported in the mainstream media.

I won’t go into an exhaustive listing of posts on the subject, because Stephanie Booth from Climb to the Stars has already done so, and is continuing to add to her list as reactions pour forth. However, I’d like to single out (somewhat at random, considering the huge volume of bloggage on this subject), Lisa Stone’s post on the hate speech wielded against women online. As she says:

With that in mind, on with the Carnival:

Young Male Colleague: What is HE doing going around talking about women’s issues? He’s a real scientist! And a guy!

Sailorman from Moderately Insane is also tackling a clueless anti-feminist, this time a blogger who’s convinced that it’s not oppression to deny women the vote.

Meanwhile, in the US, legislators have been attempting to resurrect the Equal Rights Amendment. Originally proposed in 1972, the Amendment proved too controversial for politicians at the time. While Phyllis Schlafly, bête noire of US feminists, has been loudly agitating against the proposals, ginmar puts these objections into perspective with the brief and simple text of the original act. Jaymi at Girltistic has more.

The Discovery Channel is hiring a presenter for a show on engineering. Who’s the perfect candidate? A man. Green Gabbro takes umbrage.

And Erica Barnett from I’m Sick of Your Insane Demands posts about some interesting Belgian ads promoting equal pay:

The tag line: “It’s not the hormonal rages. It’s the difference in wages.”

A study by a group of Swedish researchers, apparently showing that equality is bad for the health of both women and men has been roundly trashed by feminist bloggers. Jill from Feministe points out that Sweden – which regularly tops polls on gender equality – has the second-highest average life expectancy in the world.

Meanwhile, Goldfish over at Diary of a Goldfish, is sick of having to explain that she is a Ms not a Miss or Mrs – a problem that’s gotten worse since she married.

I knew an office team, a group of female colleagues who would have a snigger and whisper “Ms Bitch!” every time they had correspondence or conversation with someone who addressed themselves Ms. Women, who know my name and don’t really need to entitle me at all, insist on addressing correspondence to Miss Goldfish or Mrs AJ’s Surname. Women who call themselves Ms have a bee in their bonnet you see, and therefore, apparently, are undeserving of respect.

And over at Women of Color Blog, brownfemipower highlights research showing that women from ethnic minorities in the UK find it much tougher to succeed in the workplace than their white counterparts.

Polish politicians are trying to tighten anti-abortion laws, removing exceptions for rape, incest and cases where carrying a pregnancy to term endangers the mother’s health.

But Kyso Kisaen at PunkAssBlog points out that these exceptions do not necessarily protect those women that fall under them. Case in point, Alicja Tysiac, a 35 year-old Polish mother who was denied an abortion even though doctors warned that she would go blind if she gave birth.

The European Court of Human Rights has just granted her €25,000 compensation, and ruled her rights were violated.

In North Dakota, representatives rejected a bill which would have required pregnant teenagers to get parental consent before seeing a doctor or receiving medical attention. Bitch Ph.D. sees this as evidence that “children–especially girl children–are essentially chattel in the eyes of these people”.

Sylvia at Anti-essentialist conundrum posts a great video of Joy Nash ranting about attitudes to fat.

One Jewish Dyke goes in search of a Yahoo avatar that looks like her – and finds the selection of body types sorely lacking. But at least they expanded the line of outfits for our virtual selves to include hockey gear.

Carrie McLaren at Stay Free! posts about an ad campaign for a laxative which promises to “beautify your insides”:

Now, I’m not the gambling type but if P&G isn’t targeting anorexics, bulimics, and other weight-obsessed women with this campaign, you can have my house.

Baggylettuce at Too Fat for Fashion blogs about the treatment of Kate Moss on the front page of one of London’s free newspapers.

A recent book argues that women just don’t like to get it on as much as men – but Carly at The Best Blog You’ll (Probably) Never Read lists all the ways it’s just not that simple:

Women getting pleasure out of sex isn’t a societal priority. As long as we’re popping out babies, whether or not we enjoy it is often seen as besides the point.

The Dinah Project on research showing that a staggering one in three British women fake orgasms on a regular basis.

C.L. Hanson of Letters From A Broad tackles a sacred cow of feminism, meanwhile, arguing that objectification of women isn’t bad – it’s “a random arousal cue”.

On a more practical note, Back Up Your Birth Control Day has been and gone, but that doesn’t mean it’s too late to do something about it. Mombian blogs sagely about the importance of birth control access. As a lesbian mum, she’s not got much need of it now, but she says:

I’m blogging today in honor of Back Up Your Birth Control Day not because I have any immediate need for birth control, but because it is part of an interlocking group of freedoms that do impact me and my community.

More evidence that pharmacists in the US are routinely restricting access to the morning after pill from Ginger Miss, who asked her boyfriend to pick some up for her. Although the law guarantees both men and women the right to buy emergency contraceptives, he ran into problems when he tried to exercise that right.

Whatever happened to Ms Dynamite, the British musician behind some of the most woman-positive hip-hop in recent years? Bella at afrobella tracks her down to a BBC documentary about the Maroons, a group of slaves who escaped British subjugation in Jamaica. The Maroons were led by Queen Nanny:

A strong woman celebrated today as one of Jamaica’s national heroes, who was known as a fearless warrior who planned guerilla warfare against the occupiers

The documentary was part of the continuing events being held to mark the 200th anniversary of legislation which pulled Britain out of the slave trade.

Then head over to Mind the Gap!, where Winter sketches out what happened at a recent meeting, during which the Welsh activist group discussed the “lad’s mags” phenomenon.

Pandemian, on the other hand, is fantasising about a real magazine for women.

Anil Kumar at Jag’s Blog critiques women at a cricket match who “protested” the performance of Sachin Tendulkar by holding up a placard depicting him wearing bangles.

Does it mean that those who wear bangles – women – are … what? Useless? Incapable? Weak? Unskilled? Unable to win? Or what? Why do these women have such a negative opinion of themselves?

Where is Feminism in India going? Whither Feminism? Or is it Feminism withered?

The IFC blog posts about Offside, a film by Iranian director Jafar Panahi, “a comedy about a group of girls who are caught attempting to disguise themselves and sneak in to a Bahrain-Iran World Cup qualifier match”.

A Bird and a Bottle posts about the censorship faced by feminist cartoonists such as Mikhaela Reid.

Not to be sexist, but it’s up to women to save the sari says cricketer Shashi Tharoor. Uma, from Indian Writings, is not impressed.

Meanwhile, Sakshi Juneja from To Each Its Own finds herself beguiled by Nina’s Heavenly Delights. The Bollywood romantic comedy is about “Nina Shah, a young Indian-Scottish woman who ran away from home some 3 years back on the day of her arranged marriage”. She returns home to attend her father’s funeral – and comes out to her family.

And Mrs J at Our Kind of Parenting considers the racist portrayal of black women in Tom & Jerry cartoons.

And for something a bit more high-brow…

And here at The F Word, Abby O’Reilly considers whether “a day without feminism” is a good way to highlight the gains made over the last century.

A minor bit of feminist activism you can take part in right now. Head on over to Kate Baggott’s blog Babylune and read her posts – she’ll donate $1 to a women’s charity for every 1,000 page views between Mother’s Day in the UK and Mothering Sunday in the US (that’s 18 March-13 May).

Redthread at Chicago Parent reviews Baby Love by Rebecca Walker, a book about the trials of pregnancy for one feminist. Yes, that’s Walker as in Alice Walker’s daughter.

Blue Milk has some words to say about the over-sexualisation of Bratz dolls:

A doll might just be a doll for an adult, but a small child lacks a sense of absurdity for interpreting ’born to shop’ and ‘I’m lookin’ for trouble’. She has the whole of her adult life to be tormented by the standards of fashion, why entrap her now?

Mad Kane composes a limerick, in which she chafes at being called “a chick”.

And that’s it folks! If you would like to comment on this Carnival – or on any other posts or articles on The F Word – please use our comment form.

Photo by SeraphimC, shared under a Creative Commons license