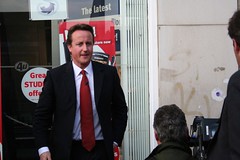 An employee of the Conservative party has been awarded £38,000 in compensation, after she was fired for having breast cancer.

Here’s a blog post about it: unfortunately no link to the original story, but More To Life Than Shoes appears to have posted it in its entirety.

Rosemary Holman said her life was made a “living nightmare” by bullying constituency boss Mike Broomby.

She claimed he picked on her, bombarded her with aggressive questions about her illness and refused to let her work from home.

Eventually he dismissed her, allegedly saying he “didn’t care” about her illness. After winning a claim for unfair dismissal and disability discrimination, Rosemary, 48, said: “It’s fantastic my suffering has been recognised.

And this is the party that’s in all likelihood going to end up running the country next time around?

Meanwhile, in other health-related news, John Crippen, of the popular NHS Blog Doctor has posted a selection of the best posts from British medical blogs (from which I sourced the above story). But he also links to this vile and retrogressive post by The Junior Doctor, describing “female geography”. An example?

Between 51 and 60, a woman is like Russia : vast, with undefined frontier. The cold climate puts off any potential visitors

It’s sad to know our taxes are going to pay this idiot, although it seems pretty typical of all those crappy, misogynist email circulars that do the rounds. But its just great to know that (we must assume) a high-profile blogger is a sexist chump too.

Talking of blogging controversy, I’ve been royally disappointed today by Penelope Trunk who blogs at Brazen Careerist and is also a columnist for the Boston Globe and Yahoo! Finance.

Penelope’s blog is usually one of my must-reads, and she has some great advice on things like why blogging is good for your career (advice I’m sure it will be no surprise I was pleased to hear).

But her latest post about Leslie Bennetts really rubbed me up the wrong way. Bennetts wrote a book on the faux-issue of women opting out of the workplace to take care of their kids. Plenty to criticise legitimately, perhaps. But here’s an excerpt from Trunk’s post:

Except, in Trunk’s post, “BUT SHE IS SO INCREDIBLY FAT!!!” links through to a photo of Bennetts, so you can go see for yourself.

Unbelievable. It’s just so sad to see anyone, let alone a woman blogging about how to build a career, reducing a published author to her dress size. Particularly in the context of endemic discrimination against overweight women.

[UPDATE: Penelope has taken down this post, in response to the criticism she received].

Photo by Edublogger, shared under a Creative Commons license