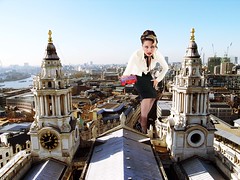 A US study has found that women in managerial positions are more likely to pay female staff under their supervision the same as men, Women’s eNews reports.

The findings flatly contradict the myth of the “pink ceiling”, which involves women blocking the career progress of other women once they ascend the corporate ladder. A myth which plays so well into all those stereotypes of catty women who can’t get along, and unsisterly feeling, which society seems to find so comforting.

“When the Boss Is a Woman,” a 2006 survey of studies by the American Psychological Association, concludes in a summary analysis that “women are slightly more likely to be ‘transformational’ leaders, serving as role models, helping employees develop their skills and motivating them to be dedicated and creative.”

Last August, meanwhile, researchers who studied data representing 1.32 million U.S. workers in 1,318 industries reported for the first time that women benefit financially from working in industries in which women have reached the ranks of senior management. Sociologists Philip N. Cohen of the University of North Carolina at Chapel Hill and Matt L. Huffman of the University of California, Irvine, found that while women generally earned 81 cents for every dollar earned by men, the number rose to 91 cents in industries in which women had reached the ranks of senior management.

Why, then, does the myth persist? Huffman says:

“Women are in a double bind,” he said. “The kinds of behaviors expected of managers, like a go-get-’em attitude and being tough, are at odds with normative expectations about how women are supposed to behave.”

Speaking of which, on the Comment is Free section of The Guardian today, Madeleine Bunting argues that Hillary Clinton and Ségolène Royal are perhaps painting themselves into a corner somewhat in their attempts to portray themselves as the “national mother” in their respective bids for the US and French presidencies.

“Because I am a woman, things will be different,” declared Royal. “The fact that I’m a woman and a mom is part of what I am,” announced Clinton. At her recent rallies, Royal has had the Marseillaise played and the French tricolour flag flying as she launches herself as a modern day Marianne – the famed symbol of the French revolution – storming the barricades of an old, staid, male political world. Her use of a very feminine wardrobe of pretty skirts and pale (often white) jackets is a contrast to the usual female political wardrobe of sober trouser suits and pillar-box bright colours. She makes no apologies for her femininity; “Mother Nation”, the admiring newspaper Libération has christened her.

What will the end result be, Bunting wonders, for the next generation of female politicians, if Royal and Clinton fail to secure the top job?

Royal has been dogged by persistent sexism. “Who will look after the kids?” was one comment from a party comrade on hearing of her presidential bid.

Photo by 50ft Woman, shared under a Creative Commons license