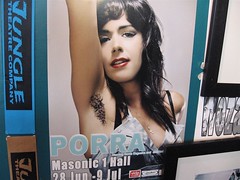 There was a period of time when I was quite confident a Brazilian was a type of coffee you could buy at Starbucks, and a Hollywood nothing more than a euphemism for the type of pearly-white smile that can only be achieved by having a miner’s helmet inserted into your gullet. However, with women’s magazines weekly promoting shaving, sugar waxing, depilatory creams and anything else to precipitate the virtual scalping of our nether regions, I began to realise that I was mistaken.

I now cannot help but rest uneasily, concerned that during my sleep I’m cultivating a bush so big that come the Christmas season old men will be trying to trim it with tinsel, baubles and fairy lights. Dramatic? Maybe, but what has prompted this cultural obsession with silky-smooth pits? And why is it that to consider wearing a skirt without shaving our legs is considered tantamount to sacrilege? Journalist and comedienne Shazia Mirza recently launched an investigation into our preoccupation with hair-removal in a documentary for BBC Three entitled, ‘F**k off, I’m a hairy woman.’

The premise behind the programme was to determine how receptive society is to a woman who refuses to trim her muff. Mirza, a self-confessed ‘hairy’ woman, who ordinarily incorporated hair removal into her daily beauty regime, abandoned all efforts for the few weeks that the programme was being shot, not only to analyse the way she was treated by those around her, but also how it would affect her personal confidence in a social capacity that prizes the body beautiful above all else. What transpired was the link drawn between hairless-ness and femininity; that the former helped to determine the definition of the latter. To be hairy is to reject womanhood, with one woman derogatorily suggesting that it was a state of being only promoted by ‘feminists and political activists,’ scoffing at the prospect of women in general adhering to this way of thinking. Are not feminist and political activists ‘real women?’ or is the idea of the hairy Mary positioned alongside them as representative of social transgression, similarly positioning those proponents on the margins as social outsiders diversifying from the norm? It would seem than that narrow-mindedness and social stereotyping continues to permeate all aspects of the social consciousness.

Mirza was keen to push the idea that women can be sexy and unshaven into the mainstream, although her meeting with the editorial team at Loaded Magazine did nothing but consolidate the idea that the majority of women are in thrall to the feminine ideal perpetuated by the burgeoning lads mag culture. One woman suffering from Polycystic Ovarian Syndrome (PCOS) developed facial hair, and as a result had to shave daily, the condition destroying her self-esteem owing to the expectations imposed upon us with regards to how we should look. In contrast, Mirza met with a woman who developed a moustache and beard not owing to a hormonal imbalance, or to any other medical condition but because, as she stated, “it’s just the way I am.” Despite aspirations cast on her sexuality, this woman lived a happy life and found that it did not impinge greatly upon her personal relationships, an attitude that was refreshing. Perhaps, then, if we begin to embrace our hairy bits as being part of who we are, then we could help to reverse the pressure places upon us to wax them? It would require, however, both men and women alike to be ‘re-educated’ to redefine their definition of what it means to be attractive, and frankly it’s an undertaking that unfortunately very few would be brave enough to advocate.

We live in a culture where beauty is defined by youth and maybe this is the problem? The growth of hair, in men as well as women, is synonymous with changes in the body and maturation, with the whole beauty industry spawned to try and reverse the affects of that cheeky scamp Father Time. To embrace these changes is to demonstrate an acceptance of this physical transformation, and many would consider a failure to ‘maintain’ our bodies against the grain of nature and be how we are ‘supposed to be;’ self-conscious and insecure about the way we look. This is why men and women have traditionally been represented as smooth skinned, cherub-esque beauties in arty, with not even the hind of a bikini-line or belly hair in sight, since it implies a lack of innocence and purity that has always been considered the supreme state of being. It’s not surprising then that when celebrities such as Drew Barrymore and Julia Roberts decide to go out, flashing the rats their smuggling rats in their pits that it makes the headlines, although it really should be. We’re all hairy, and it’s time it was accepted.

Mirza encountered a female designer, who made lingerie from female hair, and so organised a fashion show with women flaunting their unshaven bits on the catwalk with their heads held high. Although only one professional model would agree to participate, there were a number of women who were willing to do so, which was encouraging, with their performance inverting the idea that women can only be sexy when adhering to the male-created archetype of what it means to be a woman. Yes, these women could have been hairy and more generously clad, but what Mirza did was to invert the idea that women exist to be the object of the male masturbatory fantasy, with the collective one, and two, fingered salute at the end showing that it is possible to change these social preconceptions if only women are willing to fight to do so.

This show will be repeated on BBC Three over the coming weeks, so look out for it.

Photo by Vincent Maher, shared under a Creative Commons License