From Bollywood superstar to… housewife? 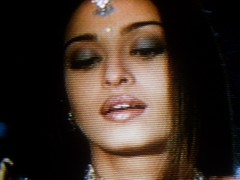 The question is being asked seriously in India, according to the BBC, which reports:

The problem is that Bollywood does not take kindly to actresses getting married.

Wedding bells usually sound the death knell for most acting careers, and if the hard truth is that a married woman in her 30s can, in most cases, bid farewell to the silver screen.

Some critics say it’s better she stops acting now before a lack of roles forces her to quit anyway.

Not everyone is convinced that her career is over now she’s married – and one critic told the BBC that nowadays there will be roles open to her, and yet it seems that she will not be able to play single women (or so I assume), an assumption that goes completely unexamined in the story:

“Aishwarya will certainly not be shunted out of the industry but she can no longer do any of the roles that other single actresses still can,” she said.

Indeed, advertisers may line up to get the couple to endorse products – but may be put off by her new role as “housewife”.

“Let’s see if they actually do it or not, because to put them together and fit them in a product and suddenly, from a goddess, she becomes a housewife, and from a young teenage idol, he becomes a husband, it’s going to be a bit of taking to in terms of their transition,” he said.

On the other hand, it seems that Bachchan can expect his career to take off now he is associated with a top actress. Who would have guessed, eh?

Screenshot by Me vs Gutenberg, shared under a Creative Commons license