Half of India’s girls want to be boys 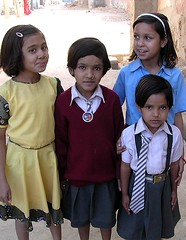 Almost half of girls in India wish they were boys, according to a government survey which also uncovered widespread abuse of children.

The Times of India reports that the government survey found 53% of five to 18 year olds in India have been sexually abused, and in 50% of cases the abuser was known to the child.

The same survey, according to the Telegraph, revealed wide-spread dissatisfaction among girls.

Almost half – 48.4 per cent – of girls surveyed said they “wished they were boys” which is incredibly sad. Everyone knows about the evils of sex-selective abortion in India, but life can still be very tough for the girls that make it.

Photo by Eileen Delhi, shared under a Creative Commons license